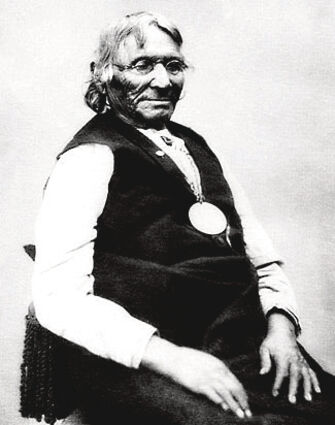 Daniel's cross-country odyssey in 1859 took him from Rhode Island to Colorado, and then back to California where he'd been prospecting for gold on-and-oﬀ since 1849. Jenks documented 130 campsites on that trip, even drawing some of them, leaving us a detailed record of his (mis)adventures along the way.

Before the California Gold Rush, the territory west of Bent's Old Fort was only known to the Natives who lived there and small cadres of Mountain Men, Trappers and Traders. When news of California gold strikes reached the Cherokee Nation in 1849, a company of Oklahoma Cherokee set oﬀ on an expedition to the goldfields.

But unlike those who'd preceded them, the Cherokee continued west at Bent's Old Fort and blazed new trails up the Colorado Front Range. The roads they pioneered in 1849 & 1850 - through Oklahoma, Colorado and Wyoming - are known as The Cherokee Trail.

Like Jenks & Company, Pikes Peakers who took the southern route to the Colorado Gold Rush in 1859 followed the Santa Fe Trail as far west as Bent's Old Fort; where the trail crossed the Arkansas River and turned to the southwest. West of Bent's Fort - and all the way up the Colorado Front Range - emigrants followed the path those brave Oklahoma Cherokee had carved out of the American Wilderness a decade earlier.

This morning I lay in my nest until the sun rose and then turned out, all steaming. Blankets, boots and everything froze stiﬀ and the hair of my head white with frost. And here, a sore that has long been festering came to a head. Jud and myself had an out-and-out, rough-and- tumble fight. He has for some time past, presuming upon his long acquaintance with the road, been very overbearing towards us Greenhorns, as he styles us, and has at various times used language towards me that I will permit no man to use.

He commenced again this morning and I put a stop to it in the most eﬀectual way. His sort can't rule me. Now it has passed by, I feel no regret that I pursued the course I did with him. Our diﬃculty delayed the train till noon. We then drove on up the river about 6 miles, came to timber and good feed and stopped for the night.

I intend to draw out from the crowd as soon as possible to avoid further trouble. I cannot submit to abuse from any source - much less from an inferior in every sense. Loren and I understand one another and he says, "Dan you are right. Jud is my brother, but you are my friend and I feel as much for one as the other. To avoid all the trouble, you and Jud must separate, I suppose."

We have now reached the point on the river where we shall have a plenty of wood, feed, etc and the country has changed, its flat surface has become more hilly.

This morning I started on ahead of the teams and reached the fort about 10 o'clock. This fort is 545 miles from Kansas City, we have been 32 days traveling time in coming this distance.

Since we struck the river this side of the cutoﬀ, our road has been near its banks all the way. The prairies are very sterile, nothing growing in many places excepting sagebrush and diﬀerent species of the cactus.

From the point above mentioned to where the Santa Fe Trail crosses the river, it is 27 miles. The distance from there to this fort is 150 miles. Here we first strike timber on the banks of the river. The fort is built of cobblestone in a rectangular shape, about 125 feet long by 100 wide and 14 high. Has two entrances, one upon the north and one upon the east and is altogether a strong fortification for the purposes for which it was built.

We found a tribe of Comanches encamped on the bottomlands to the east of the fort and only four men at the fort, which was pretty well cleaned out, we having met the train belonging to it at the Big Bend on the way to the States. I stayed here an hour or two, by this time our train came up and we went on about 8 miles further and camped for the night in good feed.

Jud and several others have stopped behind at the fort - to have a spree I suppose. I am preparing to pack a horse and go on ahead of the teams, as I can travel this way much faster than the teams go. I am sick of ox team navigation and this trip will do me for my lifetime, I think. Horned-horses may do for farming, but they "haint" just the thing for traveling.

This morning we started early, our road took us up a low hill onto the prairie, cutting oﬀ a bend in the river. From here we caught sight for the first time of the snowcapped peaks of the Rocky Mountains away oﬀ in the dim distance. Then we traveled 10 miles to the river, where we stopped for breakfast.

Whilst at breakfast, Chief Ten Bears and another Comanche rode into camp from below, stating that they expected their whole tribe to come in here from above during the day. About noon, just as Dan and I had finished our preparations for packing, we heard an awful clatter on the other side of the river and we soon saw the advance guard of the tribe come rushing into the river.

On they came like a flood. Big bucks with their hideous faces daubed up with paint, riding their meddlesome ponies. Long files of squaws leading ponies loaded down with their camp plunder, trailing their lodge poles behind them. Papooses without number and of all sizes, from the infants lashed in a sack and slung between the poles, to the young bucks just able to straddle a pony. On they came, fording the river and pitching their camp right around us.

Our horse being packed, Dan and I started oﬀ and our train soon followed, all being anxious to leave this neighborhood as soon as possible. We made (Dan and I) 20 miles that afternoon and all the afternoon, as far as we could see oﬀ the river on the opposite side, this tribe was still a coming, strung out for miles and miles along the trail. There must have been several thousand of them, and they had at least a thousand head of horses.

Dan and I have packed on Loren's horse 10 days provisions, our blankets, cooking utensils, etc. And in company with two western men with a hand cart are pushing ahead for Pueblo, a little settlement of mountaineers at the mouth of Fontaine qui Bouille Creek (Fountain Creek), a tributary of the Arkansas. Tonight, we camped at the mouth of a dry creek. The country today has been sandy, rocky and hilly with little or no grass, excepting a little occasionally on the river bottoms. Our teams are far behind and we expect to make an average of 30 miles a day.

Our fellow travelers of the handcart are very anxious to see the promised-land, are very sanguine of success and have implicit faith in all the newspaper stories respecting that country - which is more than I can say for myself.

We lay in our blankets this morning till daylight after enjoying one whole night's rest, which is more than I have done for weeks before. About sunrise our teams passed by our camp, they having started at 3 1/2 o'clock in the morning. We got our breakfast and packing the horse we soon overtook them and passed them, continuing on we overhauled the Ohio boys and passed them. About 9 o'clock we passed the ruins of Bent's Old Fort, which is now deserted.

About 10 1/2 o'clock we were compelled to flee to a Cottonwood grove on the banks of the river, to escape the hurricane that was filling the air with clouds of sand. Lay here till nearly night before the wind died down. Yesterday afternoon as Dan and I were trudging along we met two men driving a yoke of oxen, they belonged to Bent's Fort. The young man stopped me, I had a short conversation with him and we then separated.

Loren told me this morning that he camped with them last night and said he was from Pawtucket - and his name was either Buﬃngton Pierce or Pierce Buﬃngton - he had forgotten which. That he knew me by reputation but hadn't seen me for years and consequently didn't recognize me. I'm sorry I didn't know this at the time I met him.

Country this forenoon is sandy and rocky with poor soil and but little grass. About 4 o'clock we packed up again and travelled over a hilly road until 9 o'clock before we reached the river again, when we camped in a sage thicket for the night. 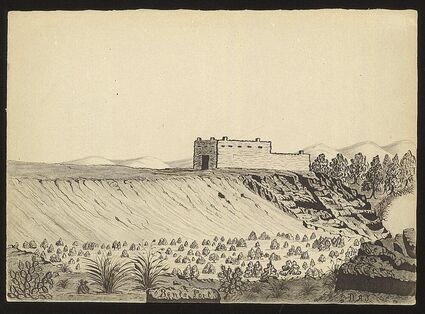 US Library of Congress

Editor's note: This article is an excerpt from a first-hand account of 1800s traveler and prospector Daniel Jenks from the new book “The Lost Gold Rush Journals” by Larry Obermesik of Hanover. The book covers Jenks’ experiences - in his own words, transcribed from his journals - of the California

Gold Rush and then his arrival in Colorado south of Fountain. Our initial story about Obermesik and his book was featured in our Dec. 1, 2021, issue. Obermesik is a member of the Fountain Valley Historical Society.