The World's top athletes to ascend Pikes Peak this weekend 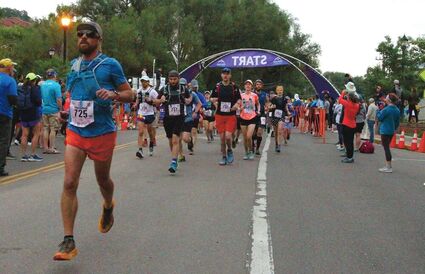 Manitou Springs – This year's Pikes Peak Ascent will be headlined by some of the top athletes in the world as part of the Salomon's Golden Trail World Series. The Ascent will be Saturday, Sept. 17, while the Pikes Peak Marathon follows on Sunday.

The Pikes Peak Ascent was chosen to be part of this year's Golden Trail World Series due to its men's "impossible record" of 2:01:06 set in 1993 by Manitou Springs's own Matt Carpenter. This year's race will be packed with fierce competition and will be one incredible experience as runners try to crack the record.

Some of the runners competing in the Golden Trail World Series include:

• Mathys is the current female record holder of the Pikes Peak Marathon with a finish time of 4:02:41 set in 2019.

• Nienke Brinkman, competing for Nike Trail, from the Netherlands. Bib #11

Top runners from around the world are competing in the Golden Trail World Series, which began in May. So far, runners have completed some of the most challenging races in the world, including Zegama in Spain, Marathon du Mont-Blanc in France, Stranda Fjord Trail Race in Norway, and Sierre-Zinal in Switzerland. The series will conclude with a Grand Final, the Madeira Ocean & Trails 5-day stage race in October.

The Ascent start line will also include some U.S. competitive athletes:

• Darren Thomas, an eight-time PPM finisher, 5th place in the Marathon in 2021, overall winner of the Golden Trail National Series in 2021. Bib #109

The Pikes Peak Marathon, founded in 1956, is the oldest continually held Marathon in the United States, taking runners from Manitou Springs to the summit of Pikes Peak at 14,115 feet and back down for a total of 26.2 grueling mountain miles. It and its sister race, the Pikes Peak Ascent, climb 7,815 vertical feet up the historic Barr Trail on the mountain's east face. The Ascent, which climbs 13.3 miles to finish at the summit, used to be held on the same day as the Marathon but became its own event in the 1981 due to its popularity.

Considered by many to be the country's most challenging Marathon, the course begins in downtown Manitou Springs and proceeds along approximately 1.5 miles of road before joining Pikes Peak's Barr Trail. This is where the real adventure begins. With an average grade of 11%, the trail is often narrow, winding, or steep, featuring gravel, rock, or dirt with sharp turns and abrupt changes in elevation or direction. 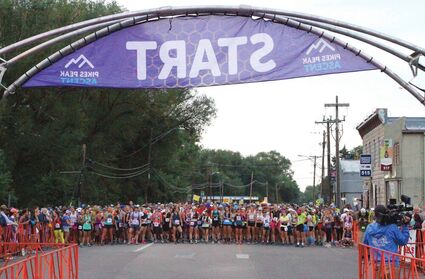 The Pikes Peak Marathon began in 1956 as a dare. Dr. Arne Suominen wanted to prove that smoking was detrimental to physical endurance, so he challenged smokers to race to the top of Pikes Peak. 14 people lined up to participate that year, of those, 3 were smokers, none of whom finished to round trip race. This is how the Pikes Peak Marathon was born!

Pikes Peak Ascent is not your typical half marathon. This 13.3-mile race from Manitou Springs to the summit of Pikes Peak is one tough race, featuring a vertical climb of 7,815 feet up historic Barr Trail. Average time to hike Pikes Peak is 6-10 hours. The record ascent is 02:01:06 set in 1993 by Matt Carpenter of Manitou Springs. Race cutoff time is 6 hours and 30 minutes.