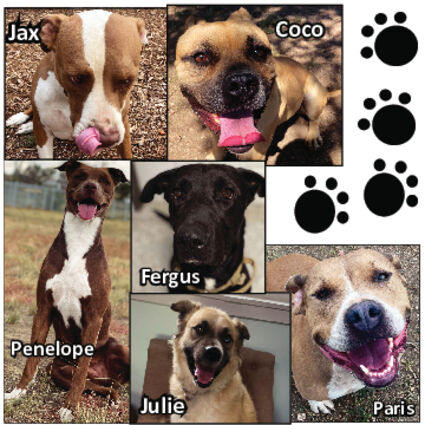 Here are the dogs we currently have, among others: Coco is dog selective and about 45 pounds She's about 2 ½ years old, a pit mix. Paris is a pit mix who's around 3 years old and about 60 pounds. She can be dog selective, but she's very sweet with people. Fergus is a lab/pit mix. It is unknown how he does with other dogs, but hasn't shown any signs of dog aggression so far. However, he can climb chain link fences. He's about 60 pounds and roughly 3 1/2 years old. Julie is a husky mix and about 3 1/2 years old. She's about 45 pounds and is dog selective. Penelope, a pit mix about 40 pounds, may not even be a year old yet. It's unknown how she is with dogs, but she hasn't shown any signs of aggression. Jax is a sweet pit who may be selective with his doggie friends. He's about 55 pounds and around 3 years old.

Due to former experiences in life, an animal may do better with one sex or the other, or possibly one size or the other, or even a breed characteristic, like type of ears. The same is true when they experience people (and is also a circumstance people-to-people). The dog I just got gets along well with the dogs (both my others are females) and is uber-loving towards people. However, on two occasions he was fearful and aggressive: both times involved a man in a baseball hat – even one who'd been here for hours working on the house, leaving, and coming RIGHT back in, hat on, whereas before it was not on. He was also carrying a toolbox. But the other man, similarly tall, wasn't carrying anything, just had the same kind of hat. So the variable, quite scientifically tested, is that type of hat!

Obviously something happened in this pup's past; we don't know what. He's extremely bonded with me, and maybe that something happened to someone he needed to protect, and that's carried over to his new life here. Nothing really terrible happened but now I know to be careful. We give you as much information as we have; the rest, with any dog that's rescued, is, aside from genetic predispositions, empirical. I've had rescues all my life – that's a long, long time – and never any real problems. A simple rule: just pay attention; you'll figure it out. We figured out having the men sit and dole out (way too many, but tiny) biscuits (and to all three dogs). Bingo. We are helping him unlearn his fear, learning he's in a better place, where no life form is threatened or hurt. 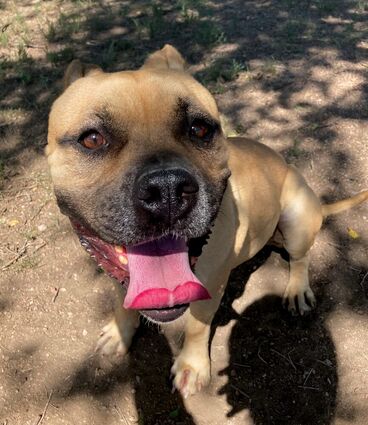