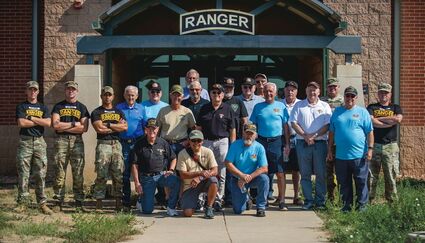 Veterans previously assigned to K Company, 4th Infantry Division, stand with the cadre of the Pre-Ranger course during the annual K Company reunion, partially held at Fort Carson on Sept. 8.

Veterans formerly assigned to K Company, 4th Infantry Division, attended a reunion at Fort Carson on Sept. 8. While here, they were welcomed and given a tour by the Pre-Ranger team.

During the Vietnam War era, these Veterans were part of an elite group of Rangers called Long Range Reconnaissance Patrol teams. These teams moved deep into enemy lines, gathered intelligence and reported to their commander.

"They normally moved out in small teams of six elements, and they would move far out before the rest of the 4th Inf. Div. would move," said Staff Sgt. Ryan Davis, a senior tactics advisor an...