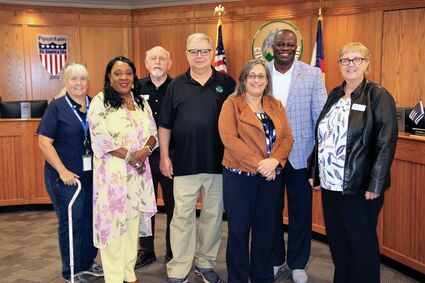 Residents of Fountain will have a new opportunity to get their junk cleaned up through a new month-long voucher program at the Waste Connections Fountain Landfill. It offers one free pickup truck bed-level load drop during the month of October.

Announced at the Sept. 13 City Council meeting, the new program replaces the one-day drop-offs held in years past. Landfill representative Adam Smith explained this will give residents more time to take care of their needs, while relieving stress and safety concerns from his staff, as one-day events created a lot of pressure for everyone involved to get the work done in a short amount of time with huge crowds. It also should prevent the long lines of cars on Link and Squirrel Creek roads, since the event will be more spread out over time.

Residents interested in a voucher need to visit City Hall with proof of residency. Second loads will qualify for a 50-percent discount. See graphic for more details on items that cannot be accepted, and pricing levels for larger loads.

In regular business, the council approved creating a new position: assistant city attorney. Council Member Gordon Rick voted against the request, stating he preferred such requests to be made during the annual budget process.

City Manager Scott Trainor said City Attorney Troy Johnson's workload had been increasing steadily over the last couple of years, often due to personnel issues and contracts needing review. Staff had considered using an outside attorney on an as-needed basis, but they determined it would be more cost-effective and useful to have someone in-house. He said the need for an extra attorney had become much more apparent just recently, prompting last week's request.

"One person cannot do this job," Trainor said. 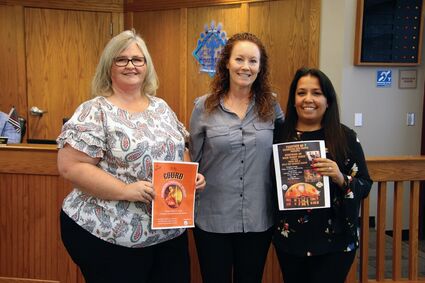 Joney Carneal, Lexi Lee and Rosa McCormick - all members of the Fountain UP events committee - display posters for some of the upcoming Halloween-themed events. See p. 6 for more details.

The council unanimously approved a new position in the Parks department. The new recreation assistant will help carry out all the tasks associated with the city's offering of sports - a list that has grown tremendously in recent years.

"We're not asking for any new money for this at all," Trainor said.

Instead, the money will come from the existing budget after a "creative" reconfiguration of funds.

Economic Development Director Kimberly Bailey provided an overview of the city's business incentives (More reporting on that to come.)

Utilities Director Dan Blankenship ended with good news: The water treatment plant near Aga Park is now connected to city wells, and testing is about to get underway. Thorough tests will be needed before the city can begin to distribute this water to customers.