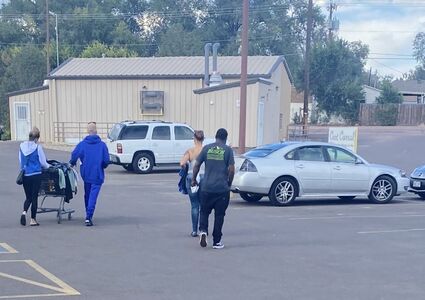 An image of the suspected shoplifters walking from the store toward the getaway vehicle, possibly a 2012-2014 silver Chevy Impala.

A Big R employee in Widefield reportedly was run over by shoplifting suspects who were attempting to flee the scene Thursday afternoon, according to the El Paso County Sheriff's Office.

At 3:50 p.m., deputies arrived to a disturbance at Big R on Fontaine Boulevard. Callers said a white man (with face tattoos), a black man and two white women shoplifted. Citizens intervened by blocking their vehicle, a silver Chevy Impala, possibly a 2012-2014 model.

The driver, the white male (possibly mixed race) with face tattoos, reportedly began ramming the vehicles around him to get out of the parking spot. The suspect ran over a Big R employee before fleeing. EPSO says the condition of the employee is not available at this time.

EPSO states it is currently working to obtain more photos and video. If you have information, please call 719-520-7777.