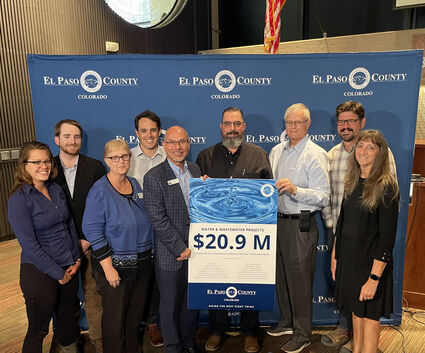 The city of Fountain will use its portion - $2,147,652 - to go toward the development of Fountain Creek Reservoir, which city leaders hope will become a much larger and reliable source of water for the city in the coming years.

"This is the key project that will unlock growth in Fountain," said Taylor Murphy, the city's water resources and engineering manager.

He said these funds will pay for project design and development, and that the reservoir could be operable in a few years.

The proposed reservoir would be located on city-owned property south of Charter Oak Ranch Road, in the southwest part of town. The city purchased the quarry in 2009 with this project in mind, then leased it back to Martin Marietta for a few years until quarry operations ceased completely. The city has conducted preliminary studies on the possibility of a reservoir here already.

Murphy said this project will be a major benefit because the city would significantly lessen its reliance on state water. The reservoir project also is very "scalable," meaning it can start small and increase in size and scope as needed.

Mayor Sharon Thompson, who spoke during the official announcement of grant awards Monday in the County Commissioners' Hearing Room at Centennial Hall, said the proposed Fountain Reservoir and Water Treatment Plant Project "will serve as a major contributor to our ability to provide the treated water we need to serve our expanding community."

The grant funds will be a significant help, she added.

"To help realize the reservoir project and significantly contribute to offsetting the development costs of such an undertaking, the city of Fountain applied through El Paso County for a grant through the American Rescue Plan Act of 2021 (ARPA). ... These incredibly important funds will not only be used in perfect alignment with the city of Fountain's Strategic Plan and priorities, but also addresses multiple core principles, goals and objectives of the El Paso County Master Plan. This alignment between Fountain's and the County's strategic priorities and goals highlights the value of this investment and demonstrates the strength of our region's focus on preparing for a common future."

As one of the communities affected by PFAS contamintation, Security Water District did receive assistance from the U.S. Air Force in paying for the treatment infrastructure initially. However, future upgrades and maintenance will be on the local district. Security is "very fortunate" to have received this grant money to offset that burden, Bernard said.

"It's very old and outdated," he said. "CSU doesn't want us operating it."

The improvements will include above-ground infrastructure that will "exceed standards," Niles added.

Widefield Water and Sanitation District was awarded $1.5 million. The District is upgrading the existing Booster Pump Station #2, which is 60 years old and nearing the end of its useful life, District Manager Lucas Hale said.

"The total estimated cost of the project is $4.5 million," Hale said, explaining that these ARPA grant funds will be used to pay for a portion of this upgrade project, which plays a role in PFAS removal from water.

"The $1.5 million of ARPA funds awarded by El Paso County will help tremendously with the total cost of the project," he said. "The upgrade to Booster Pump Station #2 will increase capacity, redundancy, and resilience to the District's infrastructure. This booster station upgrade will move water treated for the removal of PFAS from the District's drinking water mitigation facilities to other parts of the District. Furthermore, the booster pump station being upgraded is a critical piece of infrastructure allowing the District to move considerable amounts of water from its water sources in the west to customers in the east. The upgrade of this facility is a tremendous need, and the funds provided by El Paso County through the ARPA program will provide the much-needed funding for the project. Widefield Water and Sanitation District, its Board of Directors, its employees, and its citizens are grateful to El Paso County for the funds to help the District to continue to provide high quality water to its customers."

Venetucci Farm also received $79,500 in funds. Now operating through the Pikes Peak Community Foundation (PPCF) and home to Gather Mountain Blooms flower farm and events venue, the property had closed down all previous farming operations after the PFAS contamination.

The Air Force did contribute money to Venetucci, but funds were restricted to certain uses. The current grant provides for improvements to commercial taps, said PPFCF's Samuel Clark. This will allow for more water availability at the farm's events. Drinking water at the farm previously was converted to Security's water delivery system, which is the same source most neighbors in the area have been using.

County Commissioner Longinos Gonzalez, Jr., who represents several of these communities impacted by PFAS, said officials reviewing the grant applications knew that "clean, safe water" was a priority in making these decisions.

"The PFAS situation was something that was at the very top of the criteria, as well as any other type of contaminants in the county, but that is why you do see projects here awarded in large numbers, to Widefield, to Security, to Fountain and to Stratmoor Hills, and to Venetucci Farm as well," he said. 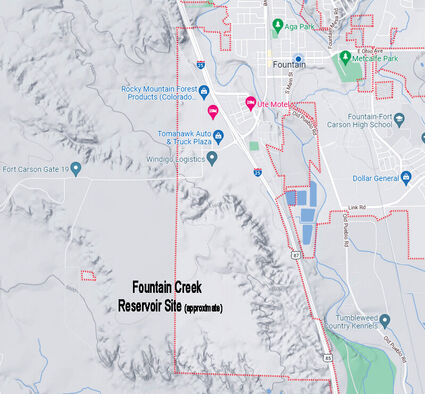 This map shows the proposed reservoir on the southwest side of Fountain.

Joe Allen, trustee for the town of Ramah, said the $2 million awarded there will go toward expensive and necessary infrastructure improvements that otherwise would have been a major financial burden. Were it not for the grant, Ramah would have had to take out large loans and pass the cost on to its water customers.

The funds are part of the $139.9 million in federal ARPA money allocated to the county in 2021 and 2022. Investments in water, sewer or broadband infrastructure were included as permissible uses in one of the funding categories.