Local History: How I came to be in Fountain The Clarence Foster Family 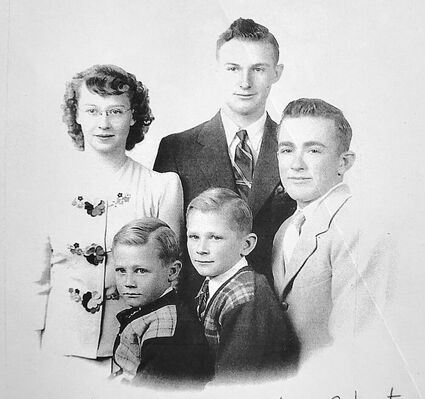 The Foster children pose together in this old family photo. Pictured back from from left are Nellie and Ward; front row, from left, are Charles, Jess and Robert.

The article in the Fountain Valley News dated September 3, 2022, was about Arthur and Alice Ward, who were my grandparents. This article is about the Fosters.

They [Clarence and Gail] first lived on a farm about a mile east of Fountain that was later called the Charles Janitell dairy and farm. Nellie and Ward were born there. Then they moved in 1933 to a farm east and north of Fountain in the Security District. They sharecropped for the Gidding Corp, that also was the Elsinore Cattle Company out of Texas. They bought the property in 1942. This consisted of 1,800 acres. They farmed alfalfa, sugar beets and had a small dairy of about 30 cows. They also fed and took care of cattle for other people.

The house was across a creek. They lived there until a new house was built closer to the main road. There was also another house in which Nellie and her husband, Delmar (Buggs) Johnson, lived until the farm was sold. He [Delmar] worked the farm for Clarence until it was sold.

Clarence had two brothers, Vic and Ray Foster. They had a farm south of Fountain about one mile. I was told that this farm raised sugar beets as early as the 1920s. They later built a house on Main Street in Fountain.

Clarence was on the Widefield School Board for several years. The Widefield School football field stadium is called the C.A. Foster Stadium. Clarence started the soil conference in the area and held the offices of secretary, treasurer and also president.

Nellie said that her mother, Gail, didn't drive till she was in the band and had to have some way to get to school so her mother learned to drive. Then she [Gail] drove for the Red Cross Motor Pool at Petefield to transport people coming and going out of the post. [This family history was first written by Nellie Foster Johnson]

Look for more articles to come and learn how our first families interconnected and helped make Fountain what it is today.

Learn more fascinating local history: The Fountain Valley Museum, 114 N. Main St. in Fountain, is open to the public every Saturday from 10 a.m.-3 p.m., as well as by appointment.

The next meeting of the Fountain Valley Historical Society and Museum is scheduled for 10 a.m. Monday, Oct. 10, in the downstairs of the museum.