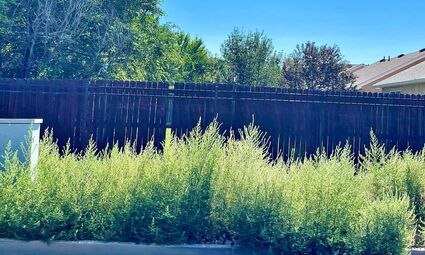 These weeds along Fountain Mesa Road, pictured here in mid August, were mowed down later that month after growing well over 2-3 feet in some areas.

Last week city staff provided the City Council a lengthy overview of the state of weeds in Fountain, including explanation for why certain areas may seem more overgrown than others.

"This has literally been the year of weeds," Deputy City Manager Todd Evans said.

Some residents have complained that the city is quick to cite property owners for weed violations while ignoring some of their own.

In addition to abundant rain causing quick, seemingly uncontrollable growth, weeds were left partly unchecked due to staff shortages, Evans explained. Departments such as Streets and Parks were chronically short on manpower in the last year, meaning the few employees available this summer simply couldn't get to all the landscaping needs as often as necessary.

The city has 77 miles of right-of-way area to maintain. Parks and Streets share mowing duties and divide up these areas. The neglect of weeds was not for lack of trying, Evans said.

"They literally don't have the people to go out and do it," Evans said, adding that on a few occasions he went out with a weed whacker to tackle some specific trouble spots when no one else was available.

For the first time, the city hired an outside contractor to assist with these tasks, and those crews eventually were able to make a dent in the overgrowth.

Perhaps most significantly, the city has learned that some neighborhoods that were developed with a Metro District or Homeowners Association (HOA) in charge of such maintenance have since disbanded those bodies, leaving maintenance duties to the city. In several cases, the city was not notified of this and therefore did not know it needed to take over the mowing there, resulting in major overgrowth.

Neighborhood Services Supervisor Tish Cornella explained that the city's citation process is not quick; property owners are given several opportunities to correct problems.

Residents occasionally made statements like "I'll mow mine when you mow yours" throughout the summer, referring to city property. She said she understood the sentiment, but replied there was no comparison between one person's failure to mow a small lot and the city's burden of 77 miles.

Other residents wanted the city to do more to force people to get private property weeds cut by any means necessary. Cornella said the city can pursue emergency abatement for issues like sight obstruction or serious hazards, but that is still a five-day process. It helps if the person making the complaint explains what the hazard is to give the situation priority, she said.

City officials also reminded the audience that the Colorado Department of Transportation is responsible for roads like Mesa Ridge Parkway and Hwy. 85-87, and CDOT has staff shortages as well.