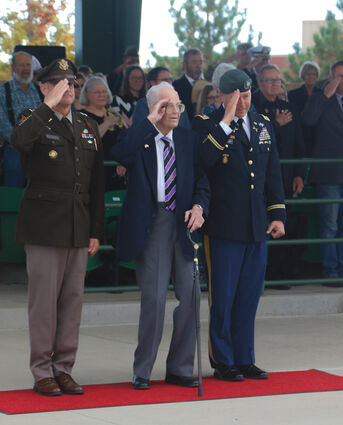 The 3rd Infantry Division presented a Silver Star Medal to Staff Sgt. Harold A. Nelson, an infantryman and Dogface Soldier, for his service in World War II from Nov. 1942 to June 1944 during an award ceremony at 4th Infantry Division's Headquarters on Fort Carson, Colorado, Oct. 4, 2022.

"Harold Nelson served our nation with honor and distinction and I am grateful that we could honor his service today," said Costanza. "It is important to ensure that the service and sacrifice of our Veterans, those whose shoulders we stand upon now, is never overlooked or forgotten. Harold is a Dogface Soldier and I'm proud to call myself one too."

Nelson was drafted into the U.S. Army on July 14, 1941, from Fort Cook, Nebraska, and entered World War II with Foxtrot Company, 2nd Battalion, 7th Infantry Regiment, 3rd ID. During his time with his unit, Nelson took part in Operation Torch in Morocco. Following the intense fighting in Northern Africa, Nelson also took part in Operation Husky in Sicily and Operations Avalanche and Shingle in Italy.

According to Nelson, the 107-year-old veteran participated in multiple amphibious landings while living in austere and dangerous conditions for two years during 3rd ID's involvement in World War II and suffered three gunshot wounds for which he was eventually discharged from the Army in June 1945.

Based on Nelson's detailed account of combat during World War II, and a letter of recommendation from his then-commander, Capt. James Pearman Jr., who described his efforts to award Nelson the Silver Star, the award was approved on June 22, 2022, by the Army's Human Resources Command. Costanza presented the award to Nelson in a ceremony hosted by the 4th ID. 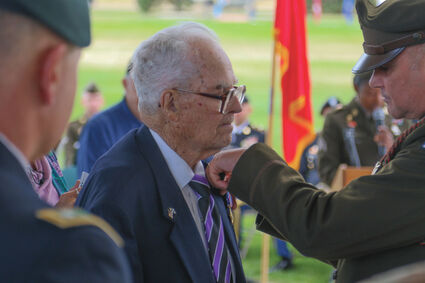 According to Nelson, he had run out of ammunition, ran a couple hundred yards under enemy fire, climbed on top of an abandoned German tank and fired the machine gun at the enemy to allow his men to advance. However, a German saw Nelson and threw a hand grenade at him which hit his backpack. The grenade tore Nelson's backpack apart and while he smelled blood, he could not find any on himself and continued shooting until the Germans finally surrendered.

In 2019, Nelson petitioned the Army Board for Corrections of Military Records to determine if he should be awarded the Silver Star, however, in 1973, a fire broke out at the military records storage facility which partially destroyed Nelson's records and reduced the amount of supporting documents Nelson could submit for the petition.

The Silver Star Medal was established by Act of Congress on July 9, 1918, and is awarded to a person for gallantry in action against an enemy of the United States while engaged in military operations involving conflict with an opposing foreign force, or while serving with friendly foreign forces engaged in armed conflict against an opposing armed force in which the United States is not a belligerent party.

"I appreciate what they have done. It's a wonderful thing," said Nelson. "I guess it means I did what I was supposed to do."

The 3rd ID's Marne Hall of Fame recognizes Dogface Soldiers that served and left a lasting impact within the 104-year-old organization, and for his service, valor and achievements, the 3rd ID also inducted Nelson into the Marne Hall of Fame class of 2022.

"This moment means I've had a great life, a great family and great friends," said Nelson. "And a lot of fun throughout the years."