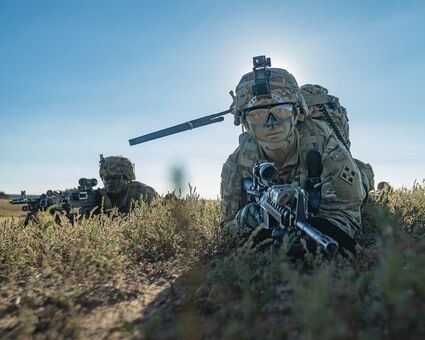 Pfc. Colby Thomas and Pfc. Isaac Thompson, infantrymen assigned to 4th Battalion, 9th Infantry Regiment, 1st Stryker Brigade Combat Team, 4th Infantry Division, set up security during a warfighter exercise on Sept. 24 at Fort Carson. Security is one of the most vital roles in any military operation, because without security, Soldiers could easily be ambushed by enemies.

The 4th Infantry Division kicked off Warfighter Exercise 23-1 at Fort Carson on Sept. 23. This 10-day exercise was designed to assess and prepare Soldiers for large scale combat operations.

The Warfighter exercise was a four-part training event with three week-long command post exercises to prepare for WFX. These exercises prepare units and leaders for a real-world combat scenario to increase readiness and combat ability.

"Warfighter is a great opportunity for a commander and his/her staff, as well as all the headquarters within the division, to go out into an expeditionary environment and train for the operations they would face in the real world on a deployment," said Lt. Col. Joshua Silver, an infantryman assigned to Operation Group Bravo, Mission Command Training Program.

Every exercise had a different scenario to prepare the command and their units for the WFX. The CPXs were essential to providing the skills and techniques required to succeed in warfighter.

"I have seen significant growth from the staff for CPX I to Warfighter," said Col. Kareem Montague, deputy commanding officer for support assigned to the 4th Inf. Div. "It's understanding the commander, figuring out what the requirements are, and how they communicate with higher headquarters."

The observer coaches watched as the 4th Inf. Div. was put through different challenges, graded the division according to their performance and provided feedback and training when necessary. The real-world scenarios and challenges were key when providing training that equips the division with all the tools and skills they need to succeed in a deployment.

Silver said the 4th Inf. Div. faced some significant challenges in taking multi-domain operations, which is a new, forthcoming doctrine. He also said the division leaned into using and implementing the doctrine in their exercise. 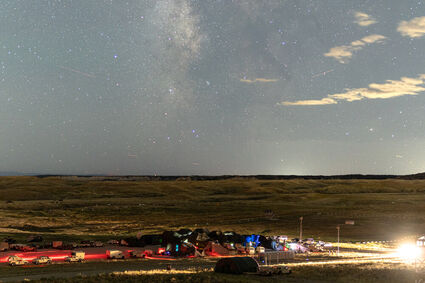 Ivy Soldiers train under the Milky Way during a warfighter exercise Sept. 24 at Fort Carson. Warfighter exercises are the Army's capstone training events for Corps and Division echelons. Conducted every two years, the 10-day exercise focuses on forward passage of formational lines, long-range precision fires and a wet gap crossing, usually culminating in a transition to a defensive posture.

"Warfighters are a valuable experience for everybody," said Lt. Col. Eric Jorgensen, an artilleryman assigned to Headquarters Support Company, Headquarters and Headquarters Battalion, 4th Infantry Division. "You get to practice your trade in a very realistic way, and exercise the tasks we need to do should the nation call."

Soldiers and leaders from across the 4th Inf. Div. had to communicate and work together to operate through the CPXs and WFX 23-1.

"A warfighter exercise shows the staff's ability to come together with conglomerate work to produce the warfighting capabilities of the U.S. Army to make sure we remain the greatest land fighting force that has ever existed," said Sgt. Maj. Richard C. Moore, a chief signal NCO assigned to Signal, Intelligence and Sustainment Company, HHBN.

The 4th Inf. Div. came together as a team to conquer the CPXs and warfighter, marking it as a successful learning experience for the whole division.

"There's a couple of things that are unique about the Ivy Division," said Silver. "They're the most upbeat and positive division training audience I've worked with. They tackle the problems in a way that was both surprising and truly praiseworthy."