2B would add 12 public safety jobs in Fountain 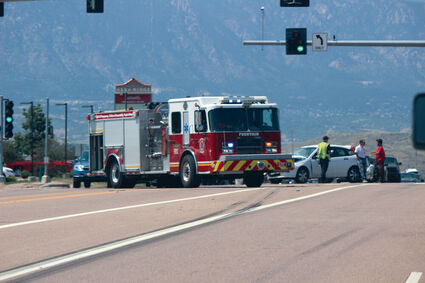 2B or not 2B, that is the question before voters in Fountain this election.

Since 1990, the communities of Fountain, Security, Widefield and Fort Carson have grown tremendously. One thing that has not grown during that time is the city of Fountain property tax rate, or mill levy.

In the coming days and weeks through the Nov. 8 election, Fountain residents will vote whether to increase the mill levy in the city in order to provide more police, fire and paramedic services over the next few years. The additional funds, if passed, are estimated to be about $1.7 million a year to be divided evenly between police and fire.

Backers of Ballot initiative 2B say the very future of Fountain's way of life may depend on the outcome of this election. Fountain Police Chief and Public Safety Director Chris Heberer said emergency responses will be at a "bare minimum" in a few years if the current level of resources goes unchanged.

"We don't want to be in survival mode," Heberer said. "We want to thrive."

The hiring, training and retention of personnel in all public safety departments is a priority for Ballot Initiative 2B. The funds would pay for six new police officers citywide, as well as six fire department employees – particularly to staff a new station to be constructed on the east side of the city in the Aspen Ranch development at Link Road and Watchmen. The goal is to have that operational in 2025. Currently, all three fire stations are on the west side, and trains occasionally cause delays in response times. The city already is saving money to go toward construction, but there are no funds to staff it.

"For the first time ever, we will actually have the money and the bodies to build and staff a fourth fire station," Heberer said. "That need is still relevant today, and with the thousands of homes on our eastern border, it's hugely more relevant."

Mayor Sharon Thompson said she supports 2B because it would "ensure we have the fire and police personnel we need to take care of our community."

"Our city has grown tremendously the last few years, and this increase in funding is needed to ensure we are able to hire, retain, and grow our public safety department to take care of our needs today and in the future," she said. "One of the main issues people are concerned about is safety. They want to feel safe as they go about their daily activities, they want their children safe at school and they want their community to feel safe. This measure would hire the necessary fire and police personnel to help with that concern."

Thompson described the proposed mill levy increase as a necessary cost, despite the possibility that some voters may not think they can support it financially.

"Investing in your community is important, and I understand it may be a financial struggle for some," she said. "But when we call, our first responders answer. They answer every time and every day. This is our way as a city we can show we support them and thank them for the outstanding way they take care of us."

The city has a page dedicated on its website, http://www.fountaincolorado.org, to the 2B proposal. One of the features is a Property Tax Calculator in which a property owner can enter the assessed value of their home to find the exact amount currently being paid to Fountain and the proposed increase. To find the current assessed value, homeowners can visit https://property.spatialest.com/co/elpaso/#/.

The matter pertains to commercial properties as well, but they are subject to different rates for assessment and often their values go down instead of up, Lewis noted. An example commercial property, valued at $5 million, might be paying 50 mills totaling $7,500; the 6.1 mills would add $915 to that.

City staff and concerned citizens discussed several possibilities before landing on the 6.1 rate, a decrease from the initial proposal that was the subject of a public opinion survey this summer.

Fountain's request for 6.1 mills is slightly less than the 6.4 mills that neighboring Security Fire Department requested of its residents just one year ago. Voters there approved the request with 62 percent in favor, bringing the total millage rate there to 16.4 – almost exactly what Fountain is proposing. Other nearby property tax rates currently are 13 mills in Stratmoor and 10 in Hanover.

Fountain Finance Director John Lewis said that despite healthy sales tax revenues in the last two years, other revenues have not increased so much and the city's income is not able to combat increasing costs across the board nor to fund additional public safety resources in the near future.

A fund that receives a percentage of sales tax from new business and is saved for public safety capital improvements gets a couple hundred thousand dollars per year, "but a new fire truck is $1.5 million," Lewis said. "So it's just not enough money." The cost of new vehicles and computer equipment is rising faster than the sales tax revenues.

He addressed a common phrase used by some Fountain residents, that "the city should live within its means." This philosophy would require the city to make cuts, which could have a ripple effect on the services it provides to residents.

"How much cut in services do people want to withstand?" he asked.

Public Safety is all paid out of the General Fund, Lewis explained. In government, there must be separate funds for various purposes. For example, water has its own fund, as does electricity, and the city can't take money from electric and put it in the General Fund.

"So when people say, "Why didn't you take that $10 million and put it toward roads? Well, they can't. It's against the law," Lewis said.

Lewis said that any residents with questions on how money is being spent, or how the proposed increase would work, is welcome to call him to discuss at (719) 322-2033. In addition, they can call the El Paso County Assessor's Office to have someone walk through the scenario.

For Jennifer Herzberg, an active Fountain resident of about 23 years, the mill levy request is a reasonable amount to improve the quality of life for everyone who lives and works here.

"A safer community is better for everyone, including small businesses," she said.

Herzberg serves as campaign manager for Friends of Fountain, a citizen group that's promoting 2B.

"We have lots of busy, very active volunteers behind this all over the city," she said, adding that she supported the idea as soon as she heard about it. "I was behind it right from the start because I feel like I want to keep Fountain safe, and do whatever we can to keep it safe."

One of the benefits from the proposal is a possibly improved ISO rating for residents of Fountain. ISO ratings are scores used by insurance companies based on the local fire department's locations, response times and other factors. Proponents say having a new fire station on the east side and six new employees should improve the city's ISO rating, thereby reducing insurance premiums.

Heberer said that cost could be lowered by $400-$600 annually, essentially offsetting the increased property tax, as long as one's insurance company uses that model.

"This will immediately help our whole community," he said.

Herzberg said she, like many Americans, has become concerned about what she sees on the news lately as crime rates are rising – nationwide, as well as in Colorado communities such as Fountain. Adding more police officers and ensuring school resource officers in every school is important, she said. Keeping them employed here in Fountain by providing better pay is part of that.

"I've heard that retention is a challenge for our police and fire, and this would help us increase retention," she said.

Heberer noted that police and fire currently are at minimum staffing levels.

"It's a struggle to bring in police officers, and we haven't even gotten to the next level of explosive growth out east," he said.

The city has 61 authorized police slots, but five are vacant now and a sixth vacancy is expected soon. With several officers out sick, on leave, out for training, home with a new baby or other scenarios at any given time, the city is automatically down 10 percent of available officers at any given time.

In the Fire Department, the staffing situation is similar. The pay is $20,000-$30,000 below competing employers, Heberer said. Fountain has a department where many firefighters get their start but then move on to higher-paying jobs once they've gotten some experience.

Despite the struggle to maintain staff now, Heberer said he is proud of what his employees are accomplishing on a daily basis. They have established two BHCON teams that deal with behavioral or mental health issues, freeing up patrol officers and preventing a large number of people from going to jail because they are getting assessments and other services they need.

From April to September of this year, FPD conducted over 2,900 parks checks in response to resident complaints about criminal behavior in city parks.

"Most of those were squashed," he said. "We have the resources to do that, and it had a tangible impact."

But looking ahead to a mere three years from now, "those resources won't be there," Heberer said.

"If our level of resources stays the same, we will be similar to Colorado Springs with a 19-minute response time for Priority 1 calls," he said. "What I lose sleep over is what it's going to look like 3, 5, 9 years from now. For the first time since 1990, we can be proactive; we can get ahead of the problem."

Currently, response times for Priority 1 police calls average 5 minutes; for priority 2, it's 6 minutes. The national average for Priority 1 is 11 minutes.

However, fire response times are lagging behind the national average of 7 minutes, but just slightly at 7:13 for emergent and 7:42 for non-emergent.

The strain on police officers and firefighters from job stress can be palpable, and funding from 2B would help alleviate that, proponents said.

"This will directly impact first responders' mental health in this community, either positively or negatively," Heberer said.

According to statewide statistics, Colorado experienced a 17.6-percent increase in murders in 2021; motor vehicle thefts were up nearly 32 percent; and other major crimes were up significantly, too. Similar increases were seen in 2020, as the world dealt with COVID.

"Guns and stolen guns are prevalent in El Paso County," said Heberer, adding he's a strong Second Amendment supporter. But gun-related crimes have skyrocketed in many neighborhoods all over the county, including in Fountain. However, the El Paso County Sheriff's Office has a serious manpower shortage, and FPD spends a lot of time in the county's jurisdiction helping with situations in communities surrounding Fountain, as these agencies have a partner approach.

Heberer said the statement by residents that "I can't believe this happened in my neighborhood," is going to become more frequent. 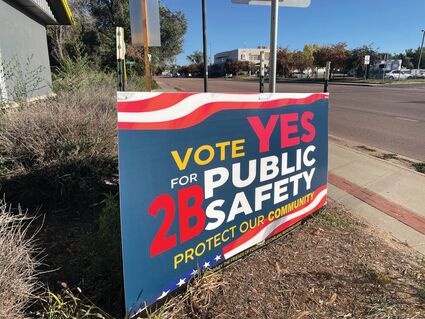 "We have a chance here on Nov. 8 to cast your ballot and be proactive," he said.

There is trafficking in Fountain, Heberer said, and the city wants to maintain the resources to combat that. And with population growth, there will be new schools in need of SROs.

"They want us in their schools, and we want to be there," he said.

Herzberg said she is hopeful that residents will support 2B.

"Everything that goes on the ballot is just a request, and voters vote their conscience and the end result is what it is," she said. "If it doesn't pass, personally I will be sad because I think it's so important, but at the end of the day voters decide. So, it's my hope that they decide in favor of public safety."