Amara annexation to be discussed at Colorado Springs council 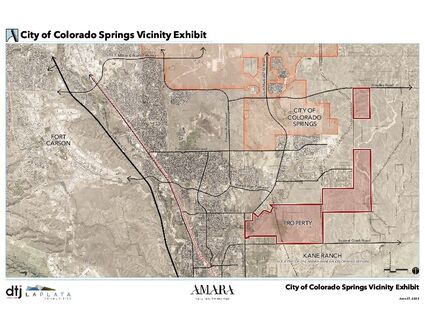 La Plata, developer of Briargate, has said it hopes to build a Briargate-like neighborhood on this property, also referred to by some as the Tee Cross property, as well as on Kane Ranch. Currently, Tee Cross (Amara) is in unincorporated El Paso County. Kane Ranch is in Fountain. Collectively, the proposed development is called Amara.

Developers requested to de-annex the Kane Ranch property from Fountain earlier this year, but the Fountain City Council voted against it. Property representatives had said they would likely take the matter to court to get it de-annexed, claiming the city of Fountain failed to provide necessary services -- specifically water -- to the site. The city has said more recently that it has plans to acquire more water that could serve Kane Ranch, but at the time of the request the applicants said it was too little, too late.

Although Colorado Springs officials previously expressed no concerns over serving Amara, a new proposal concerning development and water supply in Colorado Springs presented just last week may now pose a problem if the city adopts it.

WHAT: Town Hall to discuss the proposed annexation of Amara

Attached is a map of the proposed Amara annexation boundaries.

Colorado Springs encourages residents wishing to speak at the Town Halls to sign up in advance by emailing [email protected] or calling 719-385-5480.

These meetings will be broadcast on SpringsTV, Comcast Channel 18 and 880 (HD), and Facebook Live on the Colorado Springs City Council Page (@coscitycouncil).