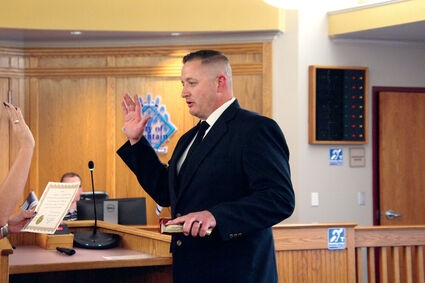 Devin Graham is sworn is as the new fire chief in Fountain during the Oct. 11 City Council meeting.

Graham hails from Roswell, New Mexico, where he worked for many years until retiring from the fire service there in 2020. He had been the chief there for nearly six years. In his introduction, Public Safety Director and Police Chief Chris Heberer said Graham had an exemplary career with a lot of experience in different positions. "He's had every rank and job" in his previous firefighting experience in New Mexico, he said.

"I'd like to really thank him for his service," Heberer said.

In related news, the council made a proclamation of appreciation for all of the city's public safety representatives, both uniformed and civilian, for their efforts in keeping the community safe.

In other business, Neighborhood Services Supervisor Tish Cornella provided the annual overview of code enforcement activities in the last year. She said that while the overall number of cases was down, this was likely due to the staff level being about half of what it normally is – meaning officers were more reactive to complaints than proactive in seeking out violations. There have been more than 700 calls for service year to date, she said.

Some of the frequent types of cases included those pertaining to homelessness, including campsites and people living in RVs or other vehicles in prohibited areas or without permission of the property owner.

"We have not seen this much activity since I started in 2009," Cornella said.

Neighborhood Services deals with 150 subsections of the Code, covering numerous topics such as dog licensing, business licenses and home-based businesses including rentals, blockages of sidewalks, streets or fire hydrants; building code violations, such as additions made without a permit; and signs in the public right of way. City ordinance prohibits any signs, other than the city's own, from being placed in the public right of way. Cornella said that starting this month, officers would discontinue removing such signs; instead, they will track down the owners of the signs and send notices of violation.

When it comes to animal violations, the city deals with sanitation problems, animals that are prohibited in certain districts, or licensing. All other complaints, including excessive barking, must go through the Animal Control division of the Humane Society of the Pikes Peak Region, which has a contract with the city for animal law enforcement.

The council approved leasing two Mack trucks for $382,488 to replace two trucks that are 15-20 years old. The trucks are used for snow removal and other maintenance.

The council also approved the purchase of a new 2023 Ford F350 ambulance for delivery next year, and the implementation of a mobile radio repeater system for city and first responders. The system would be from repurposed equipment already in the city's inventory, and it would outfit the Office of Emergency Management (OEM) Trailer to be used as a mobile radio repeater in times of disaster or low-area coverage for responders.

The new ambulance will replace a 2017 unit that is outdated, officials said, but which can be re-chassised in 2024 to attain cost savings. Up to $420,000 was approved for the new unit, but the cost should be less, staff said. Members of the Fountain City Council pose with various public safety employees after reading a proclamation in their honor during the Oct. 11 meeting.

The council also agreed to discontinue its practice of beginning the first meeting of the month at 5:30 p.m. instead of 6 when there are informal presentations and ceremonial items. From now on, all meetings will begin at 6 for consistency and to ensure the maximum number of council members in attendance for such occasions, which often include photo opportunities with community organizations and individuals.

Council Member Detra Duncan suggested revisiting the issue because the different start times were "confusing" and inconsistent. Council Member Gordon Rick noted that he had tracked the amount of time spent on such pre-meetings since January. He recorded an average of 16 minutes' worth of work conducted on those evenings that the council informally began at 5:30, meaning there was an average of 14 minutes until the beginning of the official meeting – "not the best use of time," he said.