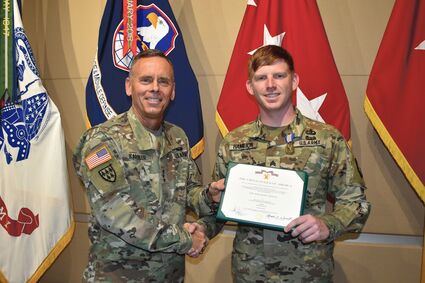 Sgt. John B. Hamilton, 1st Space Battalion, receives the Soldier's Medal, one of the Army's most distinguished awards for heroism in a non-combat situation, from Lt. Gen. Daniel L. Karbler, commanding general, U.S. Army Space and Missile Defense Command, during a ceremony at Peterson Space Force Base on Oct. 18.

PETERSON SPACE FORCE BASE – Sgt. John B. Hamilton, U.S. Army Space and Missile Defense Command, received the Soldier's Medal, one of the Army's most distinguished awards for heroism in a non-combat situation, during a ceremony here, Oct. 18.

In August 2021, while on a temporary duty assignment in Okinawa, Hamilton was snorkeling with a group of fellow Soldiers at Mermaid's Grotto when a rip current pulled Sgt. 1st Class Joshua Vallejo and two local nationals out to sea.

Without hesitation, Hamilton, a member of 4th Space Company, 1st Space Battalion, 1st Space Brigade, risked his own life to save them.

Cpt. Mitchell Phelps, the detachment commander at that time, said Hamilton jumped into the rip current to quickly reach Vallejo who was in real danger about 100 meters out.

"It was terrifying," said Vallejo. "I was right next to Hamilton one minute, and then I was just gone out to sea. I was under the water to the point where I was disoriented and couldn't figure out which way was up or down. I couldn't see the shore. My vest was ripped off. I was cramping up and having a hard time swimming. I really thought I was going to die.

"Then out of nowhere this heroic, brave man showed up," Vallejo said. "I've never seen anything like it. I am amazed at him. He pulled me in and got me to a safe place. I had a hard time figuring out what was going on, because I was so out of air and disoriented."

Vallejo said as he was being held onto by a person to make sure he did not fall over, he began wondering where Hamilton went and was concerned for his safety. As it turns out, he had jumped back into to the rip current to save another person.

"I could barely stand, and he went out there and did it twice," said Vallejo. "I am just honored. I have served for 21 years. It is very rare to meet your hero, and he is mine. I am grateful to be alive. I get to go home to my family because of him."

Hamilton was physically unable to swim back out for the third time. He stayed nearby to direct a rescue team to the third person saving that life as well.

With 35 years in the Army, Lt. Gen. Daniel L. Karbler, commanding general, SMDC, said this was the first time he has able to award the Soldier's Medal.

"This is such an honor for me to present this award to you, Sgt. Hamilton," said Karbler. "On behalf of SMDC and the Army, I just want to thank you for your actions that day and how they speak volumes for you as a Soldier, as a noncommissioned officer and as a person."

After being presented the award, Hamilton shared his thoughts from that day.

"I don't think I did anything different than anyone standing here would have done," he said. "I think that I was in the right place at the right time. I am so glad I was there, and I just wanted to help all three of them."