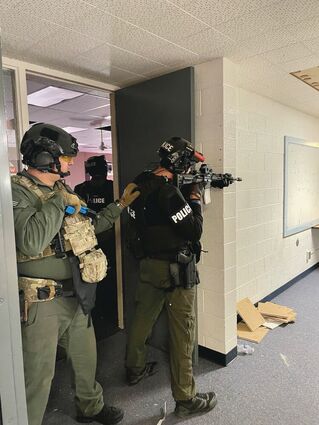 In the days after a mass school shooting in Uvalde, Texas, last May, parents, teachers and school officials all around the country undoubtedly felt shattered thinking about the children and students in their own care and how such a tragedy can be prevented from happening to them.

In Fountain, police took seriously the task of reading a report on the Uvalde incident – a document that outlines the facts of the case and points out failures in the system that likely contributed to the escalation of events and a high number of fatalities.

FPD Commander Mark Cristiani recently reported to the Fountain City Council that he had read the 78-page report "back to back, cover to cover," and that it had some crucial insights. In their council report, Cristiani and other FPD and Fountain-Fort Carson School District 8 officials emphasized numerous differences between local school security and the situation in Uvalde. They provided a stark contrast between the factors present in Uvalde compared with the local system.

"The police officers on scene simply didn't apply the training they received," Cristiani said, adding that all police officers across the country experience this type of active-shooter training. "One of the most important things that didn't happen is an incident command."

There were 376 law enforcement officers responding that day, but no one had control of the situation, he explained.

"In this report, they talk about how the failure of an incident command probably cost some lives that day because there were police officers running around – everybody wants to help – but there has to be a head coach to tell the team where to go," he said. "They did not have a head coach that day."

In Uvalde, the school district actually had its own police chief separate from the city's police chief within the same jurisdiction. These "competing" forms of authority likely contributed to confusion on scene.

"That doesn't happen anywhere here in Colorado that I'm aware of, definitely not here in Fountain," Cristiani said, where everyone involved knows who would take command of the situation.

The school district chief mislabeled the situation as a "barricaded subject" rather than an "active shooter," Cristiani added. "It's a completely different response for police."

Overall, there was a major lack of communication among the many responders.

In contrast, Fountain schools have school resources officers employed directly by FPD, Cristiani said. They work and train with FPD on a daily basis and are in constant communication with other officers and front office staff in the school buildings. School radios, FPD radios, push-to-talk cell phones among other items afford local officials plenty of options for communication.

Due to Uvalde's proximity to the Mexican border, the school had already experienced 50 lockdowns from February to May in large part due to issues at the border. That may have contributed to a false sense that this alarm was just an ordinary situation. Here, there may be one or two a month, Mallett said.

In Uvalde, there were three exterior doors left unlocked. Some doors were propped open, and one lock had been reported for needing repair. Between nine district buildings, they had six officers.

In Fountain, there is an SRO in every building, with 11 across the district. FFC8 helps pay for those salaries because administrators believe strongly that SROs should be prevalent. In addition, all SROs have master keys and key cards to be able to access whatever area necessary.

"We have the benefit of SROs in our building 100 percent of the time, every day that there's school," Mallett said.

And, since they learn better by "doing," there are frequent trainings to allow SROs to go through realistic scenarios. This year FFC8 teachers and staff will be completing additional training along with police, something they have not done previously. Fountain's Rapid Response Team (its version of SWAT) also conducts active shooter training along with other scenarios on a regular basis. Earlier this year, the RRT trained in a former elementary school building that allowed them to experience various scenarios in a realistic environment.

In addition, local officers are encouraged to act when necessary if "something bad is happening in the building" rather than waiting for a complicated approval process.

Deputy City Manager Todd Evans, who previously served as Fountain's police chief, said the department decided some time ago that there are "lower level" decisions that officers are allowed to make so they don't need to wait for the chief to make a critical decision in time-sensitive situations.

"Columbine changed some of that, right, we can no longer hold and wait for a SWAT team; you are the SWAT team," Mallett said. "My officers are confident in their skills; they don't have to ask for permission."

The city's officers even have protocol in place to work with the railroad to get trains stopped in an emergency, a critical factor in a town where tracks divide several schools from the main law enforcement and fire department hubs. 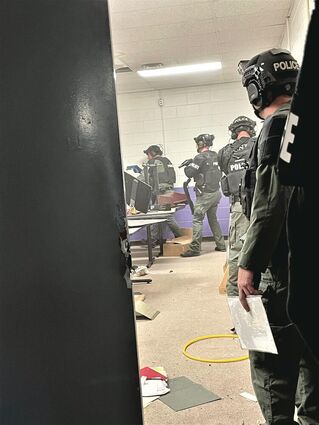 Members of the Fountain Police Department Rapid Response Team participate in realistic training exercises in the former Lorraine Elementary School building in June 2022. Practicing in an actual school building allowed them to deal with real-life obstacles such as desks and chairs, as well as a variety of door materials and locks that may need to be broken down.

Because of their constant interaction with students, Fountain SROs get to know them well and develop relationships. This culture distinguishes FFC8 from others, Mallett said.

"They brag about their kids," Mallett said. "They love them like their own."

Mallett noted that the officers on scene in Uvalde must be feeling a great deal of guilt over the outcome, and that a discussion like this is not meant to disparage them.

"They have to live with it; we just need to learn from it," she said.

Dr. Montina Romero, FFC8 deputy superintendent, said district administrators were given a copy of the Uvalde report to study for themselves. Proper preparedness was a key takeaway, she said. She pointed to numerous improvements made in recent years to ensure the safety of those inside school buildings, such as vestibules by the front entrances that provide an extra layer of locked security. From there, visitors are screened before being allowed fully inside. Secretaries can call SROs or an administrator if a situation warrants.

"Can you ever be prepared enough? No. But when I look at that Uvalde report, I can check off a lot of the boxes," Romero said.