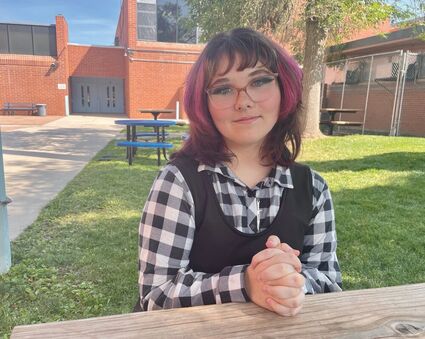 A Widefield High School student who produced a short film through the Youth Documentary Academy this summer will have her film, along with 10 others, premiere on Saturday, Nov. 5, as well as on PBS.

"We have had 13 students from the district graduate from the YDA since 2014, and of those, six have had their films broadcast on the PBS series 'OUR TIME,'" said Sam Briggs, Widefield School District 3 director of communication. "Samantha Skinner will be our seventh student to have a film broadcast. Her film is on body image, specifically on growing up heavier than other girls."

Few groups in the United States have been impacted more by the COVID-19 pandemic than teenagers. At the end of 2021, U.S. Surgeon General Vivek Murthy called teen mental health the "urgent public health crises" of our time and called for an urgent "all hands-on deck" effort to combat it. Colorado Springs, even prior to the pandemic, has had one of the highest rates of teen suicide in the nation.

Not all the news is bad. On Nov. 5, the Youth Documentary Academy (YDA) will present the world premiere and red carpet gala celebration of 11 new short films – all produced in the summer of 2022 and all addressing the important social and mental health issues facing youth from this region. In partnership with teen mental health organizations, attendees will see new films, meet the filmmakers in person, and engage in professionally moderated Q&A's by teen mental health experts. A "connections corridor" of tables sponsored by local colleges and groups like Pikes Peak Suicide Prevention Partnership, NAMI and Inside Out Youth Services will be present in the lobby to continue the conversations.

The world premiere of new films from the Youth Documentary Academy will be Saturday, Nov. 5, at 6:30 p.m. at the Colorado College Richard Celeste Theatre at the Edith Gaylord Cornerstone Arts Center, 825 N. Cascade Ave. Doors open at 6 p.m., with a VIP Reception at 5 p.m.

General Tickets (Adults: $15; Youth 18 and Under: $7.50) available at https://www.youthdocumentary.org/world-premiere-of-new-films-june-2-at-colorado-college/

VIP Reception tickets ($75) include the screening plus a reception with hor'doeurves and champagne.

The event aims to celebrate the voices and visions of youth in the Pikes Peak region. Since 2013, youth filmmakers in the Colorado Springs based Youth Documentary Academy have been producing high-caliber, nationally recognized documentary films in partnership with professional filmmakers. Stories are as diverse as the youth who made them – from blindness to veganism, from black representation to trans representation, from gun violence to the COVID pandemic.

Youth Documentary Academy (YDA) was formed in 2013 to train youth from under-represented backgrounds how to make professional documentary films. Working hand in hand with award-winning, nationally recognized filmmakers and television producers, youth produce high-caliber, emotionally-driven first-person programs that derive from their own lived experiences and appeal to a wide public television audience. Increasingly, the program is becoming a go-to for educators and families to acquire youth-generated content with a strong perspective.