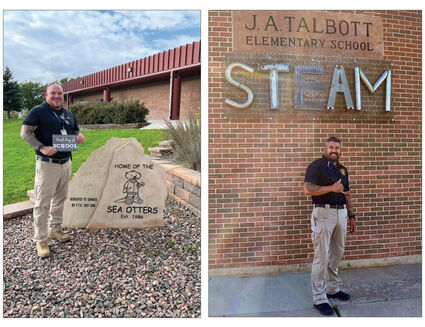 Widefield School District 3 has been making some major security upgrades in recent months, including adding armed security officers to elementary schools. To date, two K-5 campuses have new full-time officers, and more are planned for the remaining schools soon.

Officials say some of the additions have been planned for a while, but other measures went into high gear after the tragic school shooting in Uvalde, Texas, last spring.

"After the Uvalde incident, we did a self-analysis of the district's safety and security," said Sam Briggs, WSD3 director of communication. "While we had adequate safety personnel in all our secondary schools, our elementary schools only had armed patrols and we needed to increase security for all schools."

The board of education discussed the possibility of adding armed security to cover all schools during a work session this summer.

"It was determined that we could repurpose our current unarmed security staff members at each school to armed security and then hire an additional six people to ensure coverage at all schools," Briggs explained. "This would bring the total of armed security to 19 people."

This plan was discussed and approved by the board in July. Shortly after, district staff met with the existing current security team and determined the pathway for any unarmed personnel to become armed. The majority of WSD3's unarmed staff agreed to become armed security. Currently, WSD3 has hired four new armed security and is in the process of hiring two more.

"Our hope is that we have an additional caring adult in the building that is equipped to handle crisis situations and also serve as a liaison to the community," said Kevin Duren, superintendent of WSD3.

All armed security has to pass a psychological exam and a background check. They also have to go through armed training. The entire team will work in conjunction with local law enforcement for regular training updates and active shooter training to ensure best practices are being followed.

The district still has three Security Resource Officers from the El Paso County Sheriff's Office that serve the secondary schools.

"Together, the SROs, armed, and unarmed campus security work to build relationships with students, staff, and families in addition to making sure everyone is safe," Briggs said.

The armed and unarmed security members are district employees. Hiring qualifications include a law enforcement or military background, and preferably some experience working with school age children.

"Students are our greatest assets and no longer can we provide a safe space without personnel whose main focus is safety," said Mr. Duren.

In July, the district announced it had been awarded a $1.1-million state grant to increase security and emergency response measures in local schools.

The School Access for Emergency Response (SAFER) grant funding provides two-way radios and training at all schools that will give staff the opportunity to communicate directly with first responders in emergency situations.

The grant includes the purchase of communication hardware, software, and extensive training over the six-year grant period. In addition to two-way radios, the hardware includes tech towers at every school site, Briggs said.

WSD3 will use these radios for medical emergencies, disruptive or behavioral situations that require additional assistance, and for situations that fit under the district's Standard Response Protocol (secure, lockdown, evacuate, shelter in place, hold), Briggs said.

The district continues to follow its current safety practices that include the Raptor Visitor Management System that allows staff to screen visitors, contractors and volunteers in the schools. Doors are locked, and everyone needs identification to be visible and screened prior to entering any district buildings.

"We have added interior and exterior cameras to our existing surveillance system which monitors all buildings and school buses," Duren explained in correspondence to district families in August.

"We have an extensive emergency plan modeled after the National Incident Management System. Yearly training is conducted, both at the district level and school level, to keep our staff and students prepared for emergencies. Every school also practices emergency drills utilizing the Standard Response Protocol. Many of these drills are conducted with our first responder partnerships to include fire and local law enforcement."

An incident at Watson Junior High in September caused students and parents anxiety. A lockdown alarm went off, prompting the school to follow lockdown procedures including a full-scale response by emergency responders. Early on, school officials said it appeared to be a malfunction and that there was no real threat, but some parents were not so easily reassured.

Weeks after the event, the district says it verified that, in fact, the technology simply failed, causing the panic. It has since been replaced.

"It was truly a system malfunction," Briggs said. "We do not know why or how, but it glitched and shorted out. The alarm was disconnected and is being replaced."