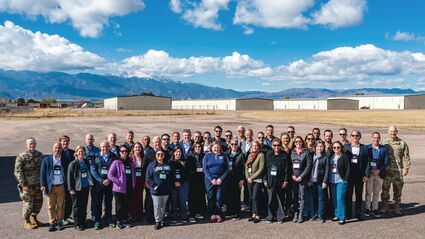 Members of Joint Civilian Orientation Conference Class 93 pose in front of Pikes Peak before visiting Peterson and Schriever Space Force Bases in Colorado Springs, Colorado, Oct. 24, 2022. While the JCOC program was established in 1948, this is the first year the class received a Space Force immersion day. During their visit, attendees of the JCOC met with senior Space Force leaders and Guardians and received mission briefs from the 2nd Space Operations Squadron and 527th Space Aggressor Squadron.

JCOC is the Department of Defense's oldest and most prestigious public liaison program. Established in 1948, it is the only Secretary of Defense-sponsored outreach program that enables American business and community leaders to have a full immersive experience with their military. Participants then share their experience and knowledge with the American public to help strengthen the civilian-military relationships.

"During your Space Force immersion, you'll be introduced to a new breed of warfighter who protects the ultimate high ground," said Cobb. "Our Guardians ensure that when Sailors, Soldiers, Airmen, and Marines need Space, when they need GPS, missile warning, or satellite communications, it's available to them to perform the joint force mission."

At 2SOPS, Class 93 engaged with Guardians performing command and control for the Global Positioning System satellite constellation. GPS is a premier space-based position, navigation and timing system that military, commercial and civilian users depend upon for functions critical to modern life around the world.

"The constellation our Airmen and Guardians command and control is used by each of you on a daily basis," said Lt. Col. Robert Wray, commander, 2nd Operations Squadron. "The ability to get from point A to point B without a road atlas, share your location with a friend, buy gas at a gas pump, or track your miles on an afternoon run all depends on GPS."

The 527th SAS prepares joint forces and coalition partners to fight in and through contested space environments by analyzing, teaching and replicating realistic, relevant and integrated space threats. Lt. Col. Christopher Adams, commander, 527th SAS, greeted Class 93 with a demonstration of what a Remotely Piloted Aircraft would see and experience when receiving satellite communication interference.

"Our mission is to prepare joint and coalition forces to fight in contested space environments by analyzing, teaching and replicating realistic, relevant and integrated space threats." said Adams. "That threat replication is critical to developing space warfighters equipped with the knowledge to succeed in a contested, degraded, operationally limited environment."

Space Training and Readiness Command, Deputy Commander, Brig. Gen. Todd Moore, hosted Class 93 for the remainder of the immersion. Participants learned how the USSF will continue to grow and develop space warfighting doctrine, tactics, techniques and procedures, and ensure Guardians are ready to operate in contested, degraded and operationally limited environments.

"We provide Guardians with training and education; we provide them with test and evaluation to give them peace of mind that those systems will get the job done once fielded; and we give them doctrine or a common set of principles on how we operate," said Moore. " It's all about integrating across all theaters and all domains, across the entire spectrum of potential conflict. Everything we do has to be focused on deterring war, and if that fails, then winning the war."

Space Operations Command conducts operations in, from, and to space to deter conflict, and if necessary, defeat aggression, deliver space combat power, and defend U.S. vital interests with allies and partners.

JCOC Class 93 will continue their week-long military immersion throughout the U.S., as they seek to better understand each services role in supporting national defense.