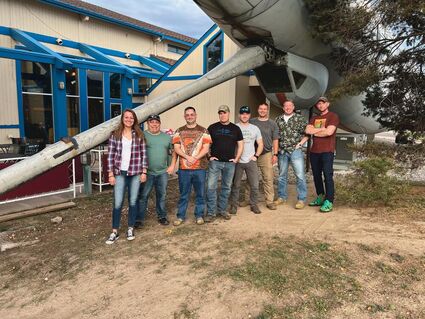 Members of the 168th Wing stand next to the KC-97 Stratofreighter for a photo after installing the refueling boom. The members volunteered to attach the refueling boom as a community service project to honor the aircraft's legacy while attending a leadership course in Colorado Springs, Colorado.

In a sleepy aviation complex on the west side of the Colorado Springs Airport, lies a retired KC-97 Stratofreighter (an Ariel Refueling aircraft reminiscent of the Korean war) that has been repurposed as part of an aviation-themed restaurant.

The KC-97, tail number 53-30283, was purchased over 20 years ago by entrepreneur Steve Kanatzar, who had it shipped in pieces to the Colorado Springs area. The aircraft was reassembled on site and side-slipped into the side of his restaurant.

The KC-97 started its aviation career with the Kansas Air National Guard. Eventually, the aircraft was transferred to the Texas Air National Guard, where it was retired. Tail 53-30283 came to Colorado Springs without a crucial part of a refueling boom.

Kanatzar spent many years searching for a refueling boom and finally found one about five years ago. However, when the boom was delivered, neither Steve nor the personnel that delivered it knew how to install it. Aviation enthusiasts from all over have admired the aircraft and the boom but the boom was just lying on the ground behind the aircraft. Without the know-how to move the nearly 1000-pound boom and properly secure it to the back of the plane, it continued to lay on the ground.

On September 28, Senior Master Sgt. Scott Murrah of the 168th Wing and a couple of his fellow supervisors were in Colorado Springs for a senior leadership training course. Being aviation enthusiasts, they visited the restaurant for lunch and saw the boom lying on the ground. After asking Mr. Kanatzar what the story was, Murrah started grinning.

Murrah has worked on the KC-135 refueler for over 22 years, and as a hydraulic specialist, one of his primary duties was the removal and installation of the air refueling boom.

After a brief discussion with Mr. Kanatzar about the boom, Murrah reached out to the rest of his team in the area for training, and all nine agreed. The boom could not be left lying on the ground behind this legacy aircraft.

Most Americans don't think about the use of refuelers in flight being such a critical part of past, current, and future air operations. Installing the boom on the airplane would make the aircraft look complete and maybe get some customers in the restaurant to ask, "Hey, what is that thing on the back of the plane for?" 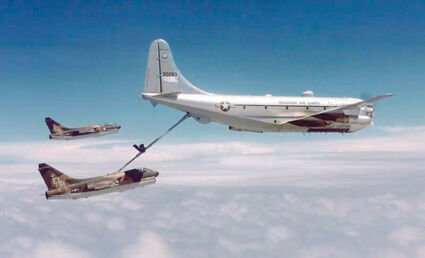 The boom installation took the small team just an hour to complete, with a bit of heavy lifting. This small team from the 168th Wing was attending the class in part to bring the group closer together. We had no idea that this community service event would also be one of the things that brought us closer and increased camaraderie. For aviation enthusiasts, if you are in the Colorado Springs area, stop by the Airplane Restaurant and check out the Korean Era KC-97. If you look around hard enough, you may see a polar bear or two!

For most, the Polar Bear may seem out of place in Colorado Springs, but not for this group of Alaskans that are part of the 168th Wing. A Wing that is consistently the right Wing, in the right Place, at the right Time.