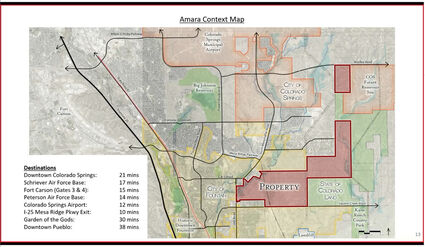 This map from an Oct. 25 City of Colorado Springs townhall shows the location of Amara in relation to the city.

While developer La Plata Communities extolled the benefits of the proposed master-planned community, numerous residents of various jurisdictions voiced their concerns - the top one being water supply.

"Can we drink money? Can we magically make it into water? I don't think so," argued Colorado Springs resident Anna Lopez.

La Plata started the process of annexing the land into Colorado Springs after Fountain said it may not have enough water to supply a large project like this at full build-out. Developers had hoped to create one cohesive project out of the Amara property, previously referred to as Tee Cross, along with the Kane Ranch property in the Fountain city limits. However, once Fountain's water supply for such large developments became uncertain, La Plata requested to de-annex Kane Ranch out of Fountain as well as started the application process to annex unincorporated Tee Cross (Amara) into Colorado Springs. The intention would be to annex Kane Ranch into Colorado Springs as well.

However, in April of this year, the Fountain City Council voted to deny the Kane Ranch de-annexation request, arguing that the city had plans to acquire more water in the near future and that possible development of Kane Ranch in Colorado Springs would be detrimental to existing Fountain and Security-Widefield residents. Fountain has since acquired funding to design and begin development on a new reservoir, but full use of that is still a few years in the future. Shortly after the denial of the de-annexation, La Plata and the property owner of Amara filed suit against the city of Fountain to force the matter. However, there has not been any significant movement in that case.

In the meantime, La Plata's request to annex Amara into Colorado Springs has been progressing through the various stages of the annexation process. The Oct. 25 townhall was an informal opportunity for people to ask questions and raise concerns.

Although Colorado Springs officials previously expressed no concerns over serving Amara with all utilities, a new proposal concerning development and water supply in Colorado Springs presented just the week prior to the townhall may now pose a problem if the city adopts it.

Colorado Springs Utilities, which is governed by the City Council, is considering an ordinance that specifies the city's available water supply is able to meet at least 130 percent of current usage and the projected demand, plus other factors. The idea is to ensure that new developments have enough water moving forward, as well as protecting current customers and their water needs, officials said.

CSU customers are encouraged to complete a survey on the proposal at http://www.csu.org.

The matter will go before the Colorado Springs Planning Commission on Nov. 9. The full City Council public hearings on the request will be Nov. 22 for first reading and, if first reading passes, Dec. 13 for second reading.

During the Oct. 25 townhall, La Plata Communities President Doug Quimby said Amara would fill a need in the housing market as well as provide numerous amenities and retails options for the region. La Plata recently completed similar communities such as Briargate and The Farm.

"This will be the first true master-planned community in this area of the region," Quimby said.

A master-planned community provides a variety of housing types, sizes and prices ranges, he said. Also included in Amara are up to 2 million square feet of commercial development, parks and trails open to the public, clubhouse and other amenities for residents, and land set aside for new schools. It would be a similar housing density as nearby Lorson Ranch, although with more housing types instead of only single-family homes.

Amara would benefit the area's many military families as well as help with housing costs by increasing supply, Quimby said.

"This will provide needed housing supply," Quimby said. "We are trying to provide some additional housing and housing choice in another part of the community, and this is especially important because of the price of housing. We need to increase the supply to get more affordable and attainable housing into the marketplace, and Amara will allow us to do that. This is especially true for our military bases, which Amara is uniquely situated to provide attainable and conveniently located housing options for members of the military."

Quimby noted that a housing opportunity index measures affordability of housing in an area. In Colorado Springs in 2019, it was 71.4 percent, meaning 71.4 percent of that city's residents could afford to buy a house.

"Today it is 22.7 percent, a drop of almost 50 points in three years – this is due to supply constraints, mostly, also interest rate increases and materials and labor costs,"Quimby said. "That's shocking enough, but the fact is that makes Colorado Springs less affordable than Boulder."

He said development of Amara would prompt improvements to streets adjacent to the property, as well as stimulate and accelerate the extension of Powers Boulevard for future connection to I-25.

In addition, Quimby argued, CSU has authority to buy another 15,000 acre feet from Arkansas River Basin, with contracts signed to cover about 3,200 acre feet - enough to cover most of Amara.

"For this project, there is adequate water," he said.

But for many in the audience, that wasn't enough to satisfy their concerns. Some said the issue was not just local development but rather a statewide concern, as Colorado experiences a reduction in water supply. At the very least, one person said, Colorado Springs should not consider the annexation in the middle of a drought.

Fountain resident Stephen Arce said the developer asking Colorado Springs to annex is "akin to not liking Dad's answer so coming and asking for Mom's permission." He said this situation affects Fountain's residents and the city's ability and sovereignty to deal with its issues, as the Amara development would impact them closely.

"Normally as a citizen of Fountain I would never go to another city to tell you how to how take care of your city," Arce said. "But, Fountain is surrounded by this."

Fountain Deputy City Manager Todd Evans said the city continues to have concerns about this development's impact on not just Fountain streets, but the greater region.

"This will impact the whole Fountain Valley," he said.

Amara is surrounded by "old two-lane county roads," such as Squirrel Creek and Link. Marksheffel is only slightly better, he said.

Comparing the project to Briargate is not accurate, as that area is very different.

"Briargate you've got I-25 to the west, and you've got Powers to the east; we have none of that down there," Evans said.

Evans continued that when this project was considered to be developed in Fountain, funds could have been used to improve those roads. If it goes into Colorado Springs, that won't happen.

There was a disagreement between what the city required of a developer and what they were willing to provide.

Regarding traffic through Olde Town Fountain to I-25, he said "We need about $300 million to improve what we've got down there. Throw in the Powers extension, it reaches $1 billion." 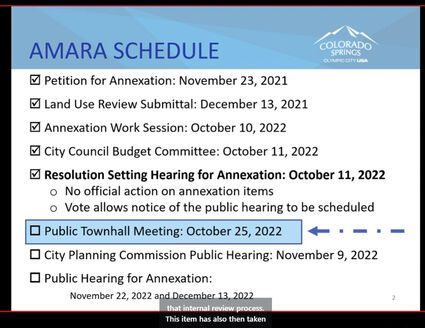 Fountain does not have the ability to expand C&S and Ohio. If this project goes into the city of Colorado Springs, Fountain still needs to work with La Plata to work on roads and Fountain officials are concerned about those prospects.

"It's going to be a huge challenge logistically," Evans said.

In addition to water and streets, public safety is a major concern.

"Will this impact our public safety in Fountain? Absolutely it will," Evans said. "Level 1 calls, because you can see we border you on three sides, our officers will have to do the right thing. And they will have to go in and serve until Colorado Springs folks can get down there, that's just the nature of the beast."