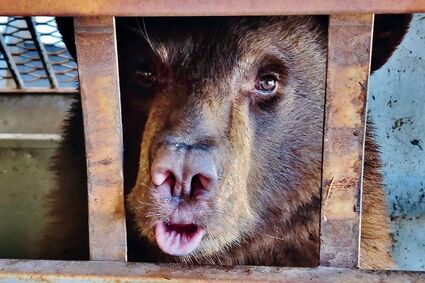 This bear, thought to be the one wandering Fountain for months, was trapped in The Glen on Oct. 30.

Colorado Parks and Wildlife trapped a bear in The Glen neighborhood on Sunday night, just in time to get it off the streets for Halloween trick-or-treaters.

Officials believe this is the same bear that has been wandering up and down Fountain along Jimmy Camp Creek over the last several months.

"The bear was finding lots of easy food sources like unsecured trash so it made the bear extremely difficult to catch," CPW spokesman Bill Vogrin said.

Most recently, it had been spotted in the Sunrise Ridge subdivision north of Mesa Ridge Parkway on Saturday night, but quite frequently in The Glen for weeks prior to that. Some residents here said they had gotten so used to seeing the bear that they nicknamed it "Glen."

"After weeks of dumping garbage cans, this bear wandered into a Colorado Parks and Wildlife trap Sunday night," CPW reported.

"This bear is going to prime bear habitat in the mountains, far from the neighborhoods where it had become a nuisance and growing far too comfortable around people," CPW officials said in a statement. "Best, folks don't have to worry if the bear at their door seeking Halloween treats is a child or the real thing!"

The bear is described as a sub-adult female, estimated to be just 2 years old and 150 pounds. CPW Officer Drew Vrbenec was going to tag and relocate the bear to more appropriate bear habitat in the mountains, far from the Colorado Springs and Fountain area.

In a video posted to CPW's regional Twitter account, Vrbenec is shown with the bear shortly after it was trapped. It seemed quite at ease in its cage and posed for the camera. 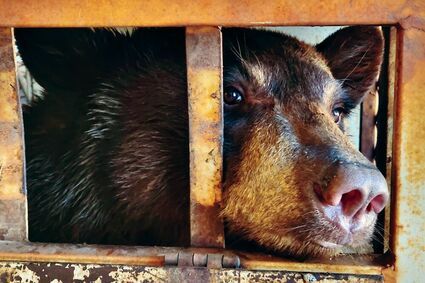 "He's been getting into trash and really kind of living off it," Vrbenec said, adding that the bear seems used to human scent after roaming around residential neighborhoods for so long. "I think he's one of the most docile bears I've ever seen."

Vogrin noted that even though this bear likely is the one seen by area residents, it may not be the only one.

"Of course, if there is one bear around there easily could be more," Vogrin said. "It's important your readers know they should practice 'Bear Aware' principles and secure their garbage, be careful with bird seed and pet food outdoors, and keep garage doors closed."

Many more tips can be found on CPW's website: cpw.state.co.us/bears