Help for Southmoor creekbank on horizon 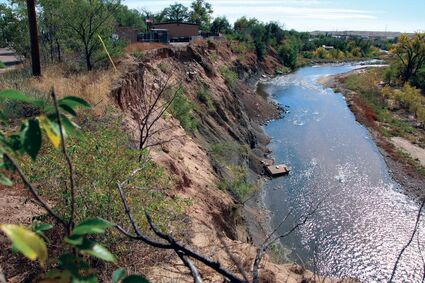 The view of Fountain Creek from Southmoor Drive looking south.

There may be a light at the end of the tunnel for the closed portion of Southmoor Drive in Fountain, which has been blocked off since April 2020 when the adjacent creekbank was deemed too unstable and dangerous for vehicle traffic.

Officials with Fountain Creek Watershed District (FCWD) say they have started accumulating enough funding that the project to fix the creek issues in that area is promising. However, at least one more outstanding grant application that is a key funding component has not yet been decided. If it's approved, the Southmoor project stands at No.1 on the Watershed District's priority list and is set to be done next year.

That update was one of several provided during an Oct. 21 tour of ongoing and future watershed projects in Pueblo and Fountain.

"The erosion mitigation project on Fountain Creek, in the vicinity of Southmoor Drive, has long been an important project for the City of Fountain," said Fountain City Council Member Tamara Estes, who also serves on the FCWD board. "The recent decision by the Fountain Creek Watershed District to move this project up in their priority list to the top of the list for 2023 will be very much appreciated by our community, the neighborhood and property owners further down the creek."

She noted that the final Watershed project list will be voted on and finalized at the Watershed board meeting on Dec. 16.

"To support construction of this project, the Fountain City Council had already tentatively set aside ARPA funds to pay a match with the Watershed District to get this project completed, and look forward to seeing it happen," Estes added.

FCWD Interim Executive Director Alli Schuch said the project to fix the creek along Southmoor Drive is estimated to cost $3.5-4 million. The district itself is contributing $2.2 million.

Fountain's contribution of $600,000 comes from American Rescue Plan Act (ARPA) federal COVID relief funds, which must be used for specific types of projects – water infrastructure being one of them.

FCWD applied for a Watersmart grant from the state this past year, hoping to apply that to Southmoor, but that was unsuccessful. Schuch noted that only one project in the state was funded through that, and not receiving it was a disappointment to the FCWD.

"We just can't do it without some grant support," Schuch said.

Now FCWD is applying for a $700,000 watershed health grant from the Colorado Water Conservation Board, which would get the project to the $3.5 million mark. The district is also looking at FEMA dollars to go toward Southmoor because it's a lower income area, and "because they've been cut off," Schuch explained.

Previously, Southmoor's place on the priority list had been uncertain. However, with the possibility of a mill levy request going before voters in Pueblo and El Paso counties in the next year or two, the FCWD board knew that a highly visible project would be needed to garner support.

"It's visible from the highway, it's impacting neighbors," Schuch said of the Southmoor location, which is just a few blocks from a heavily trafficked business corridor along Hwy. 85-87 as well as I-25 slightly north of the Mesa Ridge Parkway exit.

Many of the district's ongoing and past projects, although equally important to the health of the creek and surrounding property, are hidden from public view so most people in the watershed community don't realize how much work the district actually does – and how much more is needed.

One of the remote locations being considered for upcoming work is at the Frost Ranch in Hanover. A roughly 60-foot vertical wall, referred to by Frost Ranch owners as the "Great Wall," has been a striking example of erosion causing loss of ranch land.

The creek keeps "bashing up against that wall, making the wall more sheer," Schuch said. That one produces even more sediment than Southmoor.

According to Aaron Sutherlin of Matrix Design Group, Southmoor generates 26,000 tons per year of sediment.

In both cases, the creek has strayed from its original path, causing it to dig into land that's becoming increasingly unstable. Proposed fixes would correct the flow back to its historical one, remediate the damaged land and apply erosion control measures.

A study on the Frost Ranch project should be underway next year, with construction slated for 2024.

Fountain Creek is the second-most studied watershed in the whole country, Schuch noted. The No. 1 spot is in Florida.

"Rampant development, huge slopes, all the erosion – we have done studies that show how much sediment is coming from different parts of the watershed, and this is one of those higher priority areas," she said.

Some design work on Southmoor has been done. If the funding comes through, the design can be completed and likely followed by construction in the fall of 2023.

The district board struggles with every project that comes across for consideration, as all are worthy in some regard, but dollars are scarce.

How projects are selected

• Projects that have been identified by the U.S. Corps of Engineers as high-priority erosion, sedimentation, or flood control projects in a formal Corps recommendation for Fountain Creek;

• Any other sedimentation and erosion control, flood control including a dam or dams, or stream improvement project that is found to be acceptable by the district.

The Fountain Creek Watershed, Flood Control and Greenway District was established in 2009 to address water-quality improvement projects. Primary funding comes from the Monetary Mitigation Fund from Colorado Springs Utilities, which was stipulated as part of its permit on the Southern Delivery System project.

Contributions from member governments covers administrative costs. The district is looking more aggressively at grant funding, and considering charging land use fees as well as wetlands or wildlife mitigation funding schemes to get money from governments doing infrastructure work. 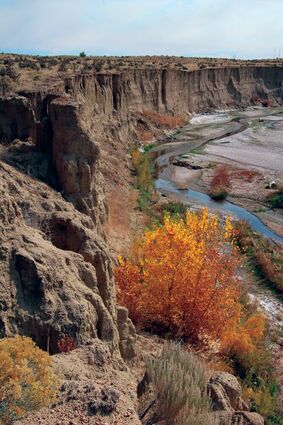 The "Great Wall" at Frost Ranch is one area of Fountain Creek planned for improvements to repair damage and prevent further erosion.

However, all those things aside, officials say the district still needs a stable, sustainable funding scheme. To that end, they are considering asking voters in Pueblo and El Paso counties to approve a mill levy, which could generate around $20 million a year for this type of work. A formal decision on that proposal has not been made.

Meetings are open to the public and noted online at https://www.fountain-crk.org/events-2-2/ Some meetings are held in Fountain City Hall, but often they are online only via Zoom.

There are numerous volunteer opportunities throughout the year, but especially during the annual Creek Week cleanups and assisting with the Fountain Creek Brewshed. For more information, see https://www.fountain-crk.org/about/intern-volunteer-opportunities/