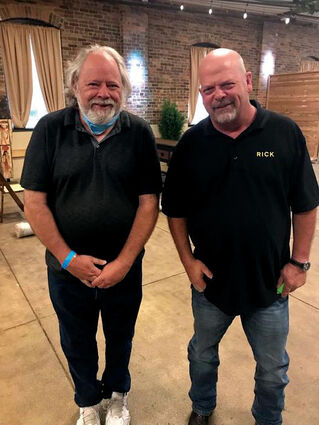 Editor's Note: This first-person account was written by Geof Clark, who worked for the Fountain Valley News for many years in advertising, circulation, sports and news before retiring in 2020. Many of our readers may remember him, and we hope you enjoy this story.

For several years, I wanted to appear on the reality show Pawn Stars.

The show is set at the Gold & Silver Pawn Shop in Las Vegas.  It features people bringing in different and unique items to sell. Either owner Rick Harrison, his son, Corey, or family friend Chumlee, are filmed negotiating with the seller trying to agree on a price. The negotiations are then broadcast on the show, which airs Saturdays on the History Channel.

Well, I recently had that chance when I attended a Pawn Stars taping in Denver.  I actually was filmed talking to Rick about selling my 1983 Radio Shack TRS-80 computer with all its manuals and 5 ¼-inch floppy disks.

I was also filmed after I made the deal, talking about the deal and what I was going to do with the money.

I had met Rick the night before the filming and regardless of how he sometimes comes across on TV, he is a very friendly guy. We even took a picture together; I was in 7th Heaven having met one of my idols.

I was one of the fortunate ones who was actually filmed for television.  Most of the people who brought items had them appraised but were not filmed selling them.

The taping took place over three days and was open to the public.  I attended the first two days and sold my computer on the second day.

Everyone who attended the tapings got paid at the end of each day. Whether you were or weren't filmed selling an item, you were asked to walk around in the background while other scenes were being filmed, so I should be in several background shots as well. 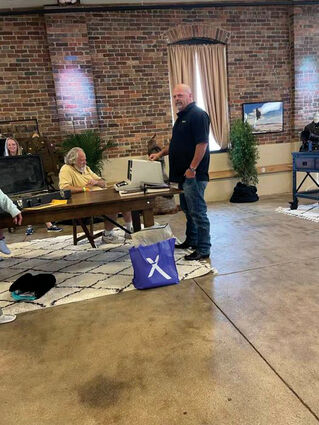 Geof Clark, seated at the table with his 1983 Radio Shack TRS-80 computer, and Rick Harrison of "Pawn Stars" are pictured during filming in July. At left, a snapshot of the check Clark received from Pawn Stars for his vintage computer.

Prior to the computer being sold, it was the hit of the event. Several of the attendees had grown up with the computer and were excited to see it again and checked it out.  Also, some of the younger attendees had never seen a 5 ¼-inch floppy, so they enjoyed seeing a part of computer history.

One of the fascinating things for me was seeing everything that goes into a filming of a TV show.  From the angles of the cameras while filming was taking place to sometimes having to do three or four takes of a scene, it makes you realize a lot more goes into filming a TV show than you might think.

It was an incredible, almost surreal, experience.  I can't wait until the episode airs so I can check to see how everything turned out and see how I came across on TV.

The episode is part of a new series, "Pawn Stars Do America." Episode 1, "Denver Gold Rush," is set to air Wednesday evening, Nov. 9, at 6:00 p.m. on The History Channel. Other individuals from the area may appear on the episode as well.