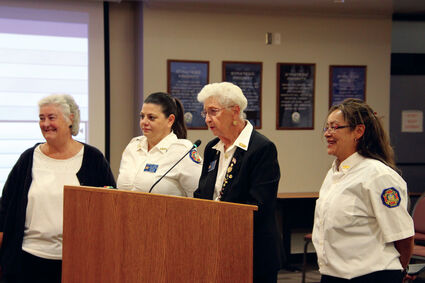 Members of the VFW Post 6461 Auxiliary address the Fountain City Council on Nov. 1 after the council read a proclamation in honor of the auxiliary's 75th anniversary. Pictured from left are Marsha Taylor, President Jennifer Hardy, Sue Tartaglione, and Sr. Vice President Bobbi Vigil.

The Fountain City Council is expected to adopt the 2023 budget during the next meeting Nov. 15.

Among the $83 million in proposed expenses are a few new items, including $250,000 set aside "for a potential future recreational pool" and merit increases of 7 percent for city staff.

The council voted to approve the budget on first reading on Oct. 25. Next week's second reading is required for final approval. In addition to routine expenses, a few other additions for next year include:

$750,000 for electric system improvements; $70,000 for restoration of areas at Aga Park that were disturbed by construction of the new water treatment facility; $625,000 for water meter replacements; $50,000 for Aga Park splash pad pump house improvements; and $200,000 for contract mowing services involving city right of way.

Because the city uses a biennial budget, the council will be approving 2023 and 2024 plans next week. However, it can only appropriate funds for the coming year; 2024 budget will formally be approved this time next year.

The overall approved budget for 2023 is $83,115,715. The total approved General Fund budget is $30,483,643. At the end of 2022, the total Unrestricted Fund Balance (including the 3-percent TABOR requirement) is projected to be approximately $8 million in the General Fund.

"In reality, that figure will likely be higher due to the fact that city departments typically spend less than their budgeted appropriations; however, that is what is projected at this time," City Manager Scott Trainor reported in his budget message to the council. "When applied against the total operating budget for the General Fund, it ends up equaling 24.2%, or approximately $1,387,000 more than the City's 20% Financial Policies goal.

"Through the 2023 budget process, we anticipated having additional funds in the General Fund of approximately $381,000 on top of the $1,387,000, for a total of $1,768,000," he continued. "However, due to an anticipated decrease in General Fund spending, the actual excess over the 20% goal is expected to approximate $2.2 million at the end of 2023. These amounts are after a recommended salary and benefits merit increase of 7% as well as $250,000 set-aside for a potential future recreational pool. City Council supported those and other recommendations, which are detailed below. Upon review of the 2023 proposed budget, City Council may request that additional dollars be allocated to other Council priorities."

The $250,000 pool set-aside is not for any one specific item at this time, but it does show the city is making a committment toward that goal, City Administrative Services Director John Trylch said.

"It's helpful to have skin in the game" he added. "I think it will give us some leverage as we look for partners."

A community pool is one of the city's priorities in its current strategic plan.

The proposed budget is available online at http://www.fountaincolorado.org under the Government tab at "Budget and Finance." A hard copy is also in the City Clerk's office.

In other business, the council recently approved the conversion of current part-time and per-diem firefighter positions to full time slots, effective this year, in a move that officials say will not increase costs. This is possible due to Medicaid reimbursements the Fountain Fire Department has been accumulating. The city has $772,484 from Medicaid this year.

"The best news is, as we look at the budget tonight, there's no impact," Public Safety Director Chris Heberer said.

There were 10 per-diem and four part-time employees. The plan created six full-time firefighter/EMT positions instead, as well as a seventh firefighter/paramedic job effective Dec. 4. Officials said this increases the department's firefighter manning levels from 10 to 12 personnel per Battalion to meet the daily minimum staffing levels of 10 personnel per shift.

Also at the Oct. 25 meeting, the council received an update on the study currently underway to evaluate the effect of PFAS on residents' health. Deanna Kulbeath, the Outreach and Recruiting Manager for Colorado SCOPE, said the study's end date is supposed to be May 2023, but progress has been slow.

"We have a lot of work to do to meet our participant goals of 1,000 adults and 300 children," Kulbeath said, adding that one particular area of interest is the neurobehavioral health effects in children.

As such, any organizations or community groups interested in having the CO SCOPE team present information and conduct recruitment are asked to contact study organizers:

The study aims to learn more about the historical contamination of the water supply in the Fountain Valley Communities (Fountain, Security, Widefield, and Stratmoor Hills), and to study health outcomes that may be potentially associated with exposure to per- and poly-fluorinated chemicals, or PFAS for short, in the drinking water.

The study is open to individuals who lived in Fountain, Security, Widefield or Stratmoor Hills between 2006 and October 2015.

At a brief Nov. 1 meeting, the City Council took time to acknowledge the contributions of the local VFW Auxiliary upon its 75th anniversary. In a proclamation in honor of the Fontaine Qui Bouille Auxiliary to the Veterans of Foreign Wars (VFW) Post 6461, the council noted that "the Auxiliary has faithfully served the Veterans of Fountain and the surrounding community for numerous decades," and "the Auxiliary serves our country again by supporting the troops who are defending our freedom and remembering fallen comrades at funerals and patriotic holidays."

The proclamation also noted that the Auxiliary "engages youth in positive volunteer experiences that serve our country, communities, veterans and active-duty military," and commended the Auxiliary "for its significant contributions to elevate patriotism in our community."

Due to the upcoming holiday season, the council's meeting dates have been changed. Upcoming meetings will be Nov. 15, Dec. 6 and Dec. 13, all at 6 p.m.