Sheriff's Office rolls out new unit to respond to non-emergencies 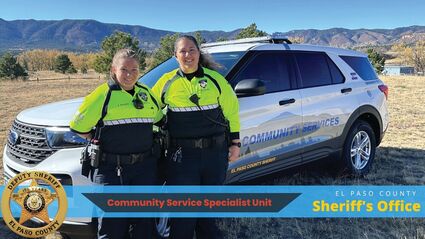 The El Paso County Sheriff's Office recently launched a new Community Service Specialist (CSS) Unit, comprised of uniformed civilian personnel who respond to non-emergency calls for service – ones that are not in-progress and that do not involve injuries.

Pictured here, CSS will serve the approximately 200,000 citizens who reside and work in unincorporated El Paso County and countless others who commute through the jurisdiction daily.

Some types of calls for service to which they might respond include Motor Vehicle Theft, Burglary, Trespass into a vehicle or onto property, Theft, Identify Theft/Fraud, Criminal Mischief, Lost/Found Property, Abandoned Vehicles, and Traffic Control for accident scenes or other hazards.

CSS Unit personnel do not have arrest authority, but will file criminal investigation reports, collect evidence, and support our sworn personnel in a variety of other ways.

"The El Paso County Sheriff's Office believes the CSS Unit will be a valuable force multiplier for our Patrol Division, allowing our deputies to spend more time engaged in proactive community policing by being mobile and visible in and around the state's most populated county and by easing the burden non-emergent calls for service place on our sworn deputies' ability to provide timely response to emergency situations," an EPSO news release stated. "The unit is expected to grow next year, although a time frame for that expansion has not been identified."

The unit was launched with two initial members who began their training in June 2022.  This training consisted of over 140 hours and covered Colorado state statutes, EPSO policies and procedures, report writing, interviewing, and criminal investigation.  Additionally, they were certified to carry pepper spray and received self-defense training.  Furthermore, they were certified in the 40-hour Crisis Intervention Training (CIT).  Their initial 140 hours of training was then enhanced with six weeks of field training during which they were taught and coached by a sworn Patrol Division deputy.

Pictured is the new CSS Unit, including two members in uniform in front of an EPSO vehicle with the specific Community Services markings they will use for their operations.

"The El Paso County Sheriff's Office stands committed to providing innovative, valued, and quality service to our neighbors here in the Pikes Peak region, and the initiation of our new CSS Unit further exemplifies this commitment," a spokesperson said.