FORT CARSON – Soldiers, Families and pets gathered in holiday attire on a brisk morning as they packed up their rucks. It was time for the 4th Infantry Division Artillery Soldiers footmarch to deliver toys to the Mountain Post Santa's Workshop on Nov. 10.

"This is a great, patriotic and unselfish event - to give toys to folks who may not be able to have them for the holidays," said Col. Damon Wells, commander of DIVARTY. 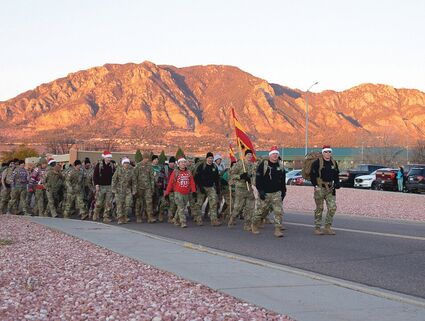 Col. Damon Wells, commander of the 4th Infantry Division Artillery and Command Sgt. Maj. Donald Durgin, senior enlisted leader for DIVARTY, led the formations for DIVARTYs toy ruck at Fort Carson on Nov. 10. Soldiers rucked two and a half miles to the Mountain Post Santa's Workshop where they dropped off the donated toys for Families in need this holiday season.

More than 500 Soldiers participated in this voluntary charity to give back to the Fort Carson community.

"We brought the whole team together as one big organization and family, spreading morale to the entire installation " said Command Sgt. Maj. Donald Durgin, senior enlisted leader for DIVARTY. "We gave back to the Fort Carson community and Mountain Post partners through a very good event."

The ruck march was a way for DIVARTY to give back to the Fort Carson community and help Families in need during the holiday season.

Once the toys were dropped off at the Mountain Post workshop, they were packed into containers so they could be processed and put into their respective rooms. After the toys were organized, the gifts were ready for Soldiers in need to select for their children.

"We're just so grateful to the Fort Carson community for their generosity," said Bryn Omer, president of Santa's Workshop. "My dad was enlisted with five kids and my family could have used a program like this."