The NSSI celebrates the formal opening of West campus 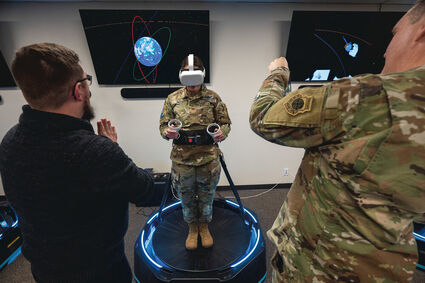 Maj. Chelsea Hatch, Aide de Camp, Space Training and Readiness Command, center, participates in a hands-on demonstration of a virtual reality immersion set inside the 'Innovation Lab' at the National Security Space Institute - West campus, Colorado Springs, Colo., Nov. 8, 2022. The NSSI-West celebrated its formal opening by holding a ribbon-cutting ceremony followed by a tour of the facility and a hands-on demonstration of education technologies.

Activated in 2004, the NSSI has since solidified its role as the Department of Defense's center of excellence for space professional continuing education. However, in recent years, due to the explosive domestic and international demand for space education, NSSI outgrew its main campus located on Peterson Space Force Base.

According to 1st Lt. Jared Hammer, NSSI assistant director of academic affairs, a solution was needed to accommodate their growing student body, faculty, and staff.

"The new campus will increase our annual capacity by 120 course offerings and more than 2,500 students," said Hammer. "Moreover, it will allow us to host additional offerings of Space 100, and also most College of Space Warfare courses supporting U.S. Space Command, as well as the Coalition Space Course." 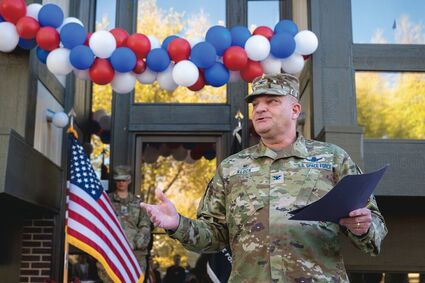 Col. Kenneth Klock, National Security Space Institute commandant, Delta 13, speaks during a ribbon cutting ceremony celebrating the formal opening of the NSSI-West campus in Colorado Springs on Nov. 8. The ceremony was followed by a tour of the facility and a hands-on demonstration of education technologies used inside the NSSI's first 'Innovation Lab.'

During the event, Col. Kenneth Klock, NSSI commandant, and Maj. Gen. Shawn Bratton, Commander of Space Training and Readiness Command, cut the ceremonial ribbon. This was followed by a tour of the innovation lab and a hands-on demonstration of some of the technologies making their NSSI debut.

"I'm grateful for the hard work and dedication of everyone at the NSSI," Klock said during the ceremony. "The technologies explored here will revolutionize how we teach Guardians to operate in an environment that is traditionally challenging to visualize and conceptualize."

Though the ceremony just took place, NSSI has successfully conducted several education courses in the facility since its doors unofficially opened in February. Construction is ongoing for some classrooms, but they are expected to be finished sometime next year.