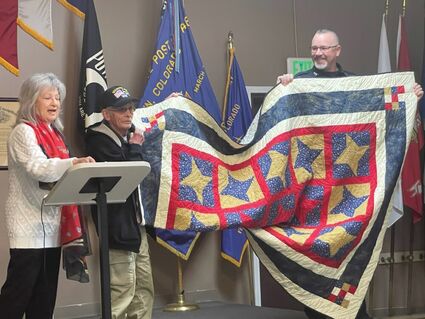 At 11:11 a.m. on Veterans Day, November 11, the VFW Post 6461 in Fountain hosted a Veterans Day ceremony for the community, to honor and salute all who have and do serve in the Armed Forces.

A special highlight at the event was the presentation of a Quilt of Courage to long-time local resident and retired businessman Michael W. Florea, for his valor and courageous service in Vietnam.

The quilt was made by members of a local sewing and crafting group known as Sew Time in the Valley. Fountain Police Chief/Public Safety Director Chris Heberer, a veteran himself, made the presentation while Fran Carrick, who formed the Sew Time in the Valley group a few years ago, read the following speech:

It is such an honor for us to be here today to honor our Veterans. My name is Fran Carrick. I'm part of a local sewing and craft group, Sew Time in the Valley. Our first meeting was held on Saturday, October 28th, 2017 and we're entering our sixth year. Our tag line is "Stitching our community together." What better way to do that, than to come together and honor those who serve and protect our community.

We hope that this is the first of many quilts to be presented to the veterans in Fountain and the Fountain Valley. Our Quilts of Courage are pieced and quilted by members of Sew Time in the Valley.

Before I announce the Veteran that is being honored today, I would like to speak about the person awarding the quilt. Our own Chief of Police, Christopher Heberer. He is a native of Colorado, from Canon City, He served 20 years in the Army as a Military Police Officer, he commanded all levels to include Platoons, Companies and Battalions. Chris deployed three times and twice to Iraq, during his career. He is dedicated to improving first responders mental health and addressing suicide prevention for first responders. He is our Chief of Police and Public Safety Director, since 2015, almost eight years. What a difference he has made, and continues to make in our City.

Now, who is this Veteran that we will recognize today? We both attended Fountain-Fort Carson High School and have known each other for a very long time. He was born in Grand Junction, CO but has lived in Fountain most of his life. He is a Vietnam veteran, having served there in 1967 and 1968. He was a gunner and Crew Chief on the Huey Helicopter and also flew in Slick Ships and Cobras. We are honoring Mike Florea today.

When he left the Army, in 1970, he worked with his Dad, Leo, at the family automotive/gas station, L & D Auto. When Leo passed away, Mike opened and operated the One Stop Radiator and Auto Repair at the same location. We were customers and like the rest of his customers we appreciated Mike's dedication and reliable work. This included working on some of his customers' kid's cars!!

After selling One Stop Radiator and Auto Repair, Mike went to work for Lowe's on the Mesa, in the plumbing department, for 12 years. Our son Dutch, a master plumber, and Floyd, my husband, would always seek Mike out for help when they went to Lowe's for parts. Dutch told me that he missed Mike being there because he was always so helpful.

Mike and his wife DeeDee have attended many Vietnam Veteran Reunions. Some in Kentucky, North Carolina, Arizona and Texas. They just returned from Gatlinburg, TN, where one was held in September.

They've been married 45 years and are blessed with three children - daughter Michelle, and two sons, Gary and Jason, daughter-in-law Liz, son-in-law TJ and four darling grandchildren. Gary, Jason, and TJ are all serving in the U.S. Air Force Reserves.

On behalf of Sew Time in the Valley, Mike, thank you for allowing us to recognize you and thank you from all of us, for your service.

Chief Heberer will now present the Quilt of Courage to Mike.