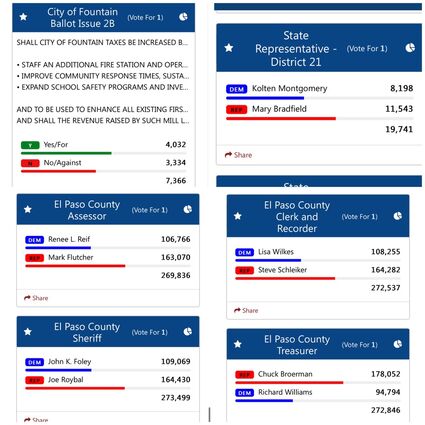 Fountain voters have agreed to the city's first mill levy increase in over 30 years to expand public safety services. Ballot initiative 2B passed with nearly 55 percent of the vote – 4,032 in favor, 3,334 against – in the Nov. 8 election.

"I'm thankful and excited with the passage of 2B that the citizens of Fountain agreed with the plan for hiring more public safety officers," Mayor Sharon Thompson said. "As our community and areas around continue to grow, I think the citizens realized the importance of having adequate police and fire personnel for our community."

2B is expected to generate $1.7 million annually, to be divided equally between fire and police departments. Each will be able to hire six new employees.

Part of the firefighter staffing plan involves a new station on the east side of Fountain near Link Road and Watchmen Road in the new Aspen Ranch housing development. The goal is to have that station operational in 2025. Currently, all three Fountain fire stations are on the west side, and trains occasionally cause delays in response times to the east. The city already is saving money to go toward construction, but there are no funds to staff it.

"For the first time ever, we will actually have the money and the bodies to build and staff a fourth fire station," Public Safety Director and Police Chief Chris Heberer said in a previous interview. "That need is still relevant today, and with the thousands of homes on our eastern border, it's hugely more relevant."

The additional 6.1 mills would cost the owner of a home with an assessed $400,000 market value about $15.30 a month. A home with a $250,000 value would mean $9.37 more a month. With passage of 2B, the total mills will be increasing from 10.239 to 16.339 in 2023, and the city will start collecting those revenues in 2024. Proponents of 2B have said that better fire protection is likely to improve ISO ratings, which can lower homeowner's insurance, so that increase in property taxes may, possibly, be made up for with decreased premiums.

"This is critical as we plan for anticipated growth that the needs for police, fire, ambulance, and the services of our BHCON teams keep up with that pace," Thompson said. "When I ran for Mayor, one of my key objectives was to 'expand public safety to keep Fountain safe.' so thank you to everyone who voted for 2B and helped make that vision come true!"