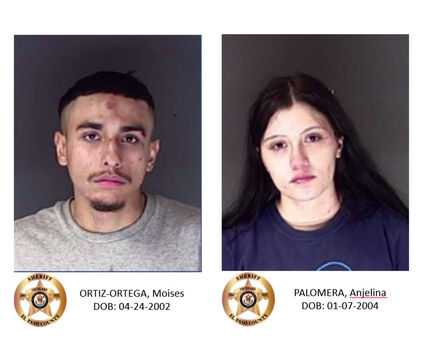 On November 21, 2022, just before 8:40 PM, El Paso County Sheriff's Deputies were dispatched to a reported stabbing at a home in the 1200 block of Forest Road, located in the Stratmoor Valley area of unincorporated El Paso County.

When they arrived, they contacted several people who were fighting in the street. After separating and detaining those involved, one of those initially detained was identified as the stabbing victim, an adult male.

Members of the Security Fire Department responded to the scene and subsequently transported the victim to a local hospital for treatment. His wounds were determined to be non-life threatening. The weapon used in the crime was recovered at the scene.

Also initially detained was the person later identified as the stabbing suspect, Moises Ortiz-Ortega, DOB: 4-24-2002. As a result of their on-scene investigation, deputies determined probable caused existed for his arrest. He was taken into custody and later booked into the El Paso County Jail on the Felony charges of 1st Degree Assault, 2nd Degree Assault, and Menacing, as well as for other Misdemeanor crimes. He was not granted a bond. His booking photo is attached to this media release.

Another person initially detained when deputies arrived, identified as Anjelina Palomera, DOB: 1-7-2004, punched a deputy on his face. She was also arrested and later booked into the El Paso County Jail for the Felony charge of 2nd Degree Assault on a Peace officer as well as other Misdemeanor crimes. She was given a $10k bond and has since bonded out. Her booking photo is attached to this media release. The deputy was not seriously injured.

If you were a witness to this incident and are willing to provide any information, please call the Sheriff's Office Tip Line at 719-520-7777.