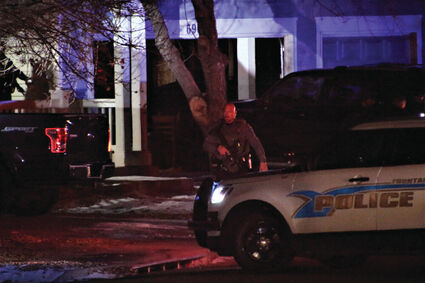 Sheriff's deputies clear the scene of an officer-involved shooting of a domestic violence suspect in Fountain on Sunday evening.

UPDATE Nov. 26: The suspect has died while in the hospital, officials reported this morning.

Since the night of this incident, Ross Floersheim has remained at a local hospital where he has been receiving continuous care and treatment. The El Paso County Sheriff’s Office has provided in-custody security at the hospital while waiting for his condition to improve, EPSO said in a news release.

Late in the evening on Friday, November 25, 2022, Floersheim passed away while in the care of local hospital staff. The El Paso County Coroner’s Office will perform an autopsy to determine the cause and manner of his death.

The El Paso County Coroner’s Office will perform an autopsy to determine cause and manner of his death. In accordance with Colorado Revised Statute 16-2.5-301, the El Paso County Sheriff's Office remains the lead investigative agency for this officer-involved shooting.

The El Paso County Sheriff's Office states one man was shot by Fountain police Sunday evening after he began shooting at officers responding to a domestic violence call.

According to EPSO, Fountain Police responded to a reported domestic incident around 6:45 p.m. at a home on Village Meadows Drive near Fountain Mesa Road. A woman said her husband was on scene, intoxicated, and wouldn't let her leave the home with her son. She told dispatchers she managed to escape the home to a neighbor's house, but her son was still in the home.

"Shortly after officers arrived on scene, an adult male emerged from the residence and fired at least one round from a firearm at responding officers," an EPSO news release stated. "At least one officer returned fire with at least one round, striking the suspect at least one time. No officers were injured. The child was immediately rescued from inside the home and was not injured. The suspect violently resisted officers' efforts to place him into custody. As a result, a Taser was used to gain the suspect's compliance."

The man was taken to a hospital for treatment and was undergoing surgery at the last update Sunday night.

The neighborhood was under a shelter-in-place order for a short time until the situation was resolved, and police said there was no other threat.

Per state statute regarding officer-involved shootings, EPSO is investigating this incident.

The suspect has been identified as Ross Floersheim, 41. The Fountain PD officer involved in the shooting is Brett Ryder, a 5-year veteran of FPD and a K9 Officer with the Patrol Division. Ryder, who is K9 Goose's handler, has been placed on paid administrative leave per department policy.