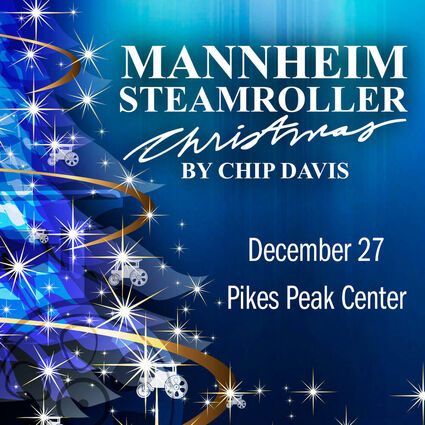 Mannheim Steamroller Christmas by Chip Davis is coming to Colorado Springs on Dec. 27. Tickets, which range in price from $58 to $88, are on sale now and are available online at http://www.AXS.com or in person at the Pikes Peak Center box office.

MANNHEIM STEAMROLLER CHRISTMAS by Chip Davis has been America's favorite holiday tradition for over 35 years. Grammy Award winner Chip Davis has created a show that features Mannheim Steamroller Christmas classics in the distinctive Mannheim sound. The program celebrates the group's recent anniversary of 35 years since the first Christmas album and includes dazzling multimedia effects performed in an intimate setting.

According to the group's official website, http://www.mannheimsteamroller.com, the music industry told Chip years ago, "Don't do a Christmas album because that will signal the end of your career." Mannheim Steamroller Christmas went on to sell 5 million copies after Chip produced it himself - and changed the sounds of Christmas music forever.

A visionary musician and businessman, Chip Davis is behind a remarkable body of work now spanning five decades. Since founding Mannheim Steamroller and American Gramaphone Records in 1974, Davis has written, arranged, and recorded over 35 albums, highlighted by the RIAA multi-platinum certified Mannheim Steamroller catalog. The best-selling Christmas music artist in history, Davis has achieved worldwide sales in excess of 41 million, with four multi-platinum, eight platinum, and 19 gold certifications in the US alone. Furthermore, Davis is the entrepreneur behind Mannheim Steamroller lifestyle product line, amateur astronomer, and dedicated philanthropist.

Experience the magic as the spirit of the season comes alive with the signature sound of Mannheim Steamroller. The show is Tuesday, Dec. 27, at 8 p.m.

The band's name came from Mannheim, Germany, where Mozart lived. Mannheim Steamroller is the name for an 18th century musical technique known as the crescendo. Source: mannheimsteamroller.com