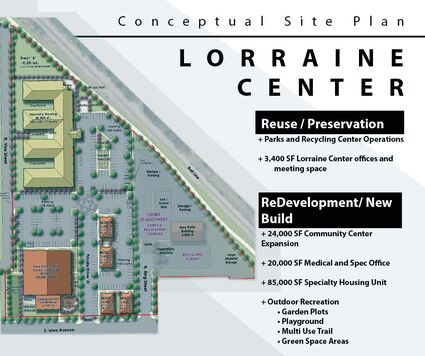 The city of Fountain has this map and full proposal for the Lorraine Center online at fountaincolorado.org.

Last week the Fountain City Council was updated on a proposal to reinvent the aging Lorraine Community Center at 301 E. Iowa Ave.

Back in August, the city conducted a survey to determine how the public would like to repurpose this 8.67-acre former school site. The 10-question survey ran for about two weeks and received responses from 562 people – a good number considering the project site is nestled off the main roads and out of sight for most people, said Economic Development Director Kimberly Bailey.

The result of study efforts was this plan, which suggests keeping 3,400 square feet of the existing building, possibly for general office space, and adding:

In addition, the existing Recycling Center would continue operations here. The Parks and Recreation Department has a new operations center currently under construction to the rear of this property.

Bailey noted that the plans are strictly conceptual at this time and "highly contingent" upon finding a private development partner.

The plans for redevelopment came about after the Lorraine Center property was submitted for Brownfields funding. A "brownfield," according to the Environmental Protection Agency's definition, is "property where expansion, redevelopment or reuse is considered complicated by the presence or a perceived, suspected presence of contamination."

Instead of complete elimination, the Lorraine Center property is proposed for cleanup and reuse. Formerly a primary school and later the local YMCA, the property is expected to keep the title "Lorraine" in honor of the former teacher for whom it is named.

Bailey explained that the survey had three major takeaways that went into this proposal, with a key them of reusing and preserving:

People indicated they don't want more growth, but rather specialized housing to support affordable housing for certain sectors did come across as a priority, Bailey elaborated.

"I would say that our relationship with our military partners, I think, is stronger than it's ever been," Trylch said.

IGSAs allow the city to administer certain work contracts or programs for the Army. Currently, Fountain's IGSAs include pest control and minor construction services. These allow the Army to save money and minimize red tape while providing the city some income for its role in facilitating the work. There are two more IGSAs pending approval, including one for animal control, which was slated for consideration on Dec. 13 after this paper's deadline.

"This amounts to about $36 million in services that we would be providing to Fort Carson if the two proposed go through and the ones we're already providing," Trylch said.

To the city, these will amount to about $2.8 million in revenue over the next 10 years. But the value is not just in the money but also through the "invaluable relationship with military neighbors," Trylch added.

He noted that earlier this year Fountain was nominated by Fort Carson Garrison for the 2022 Army Partnership Award. This was submitted to the Army, and a decision should be forthcoming.

Other departments under Administrative Services provided updates on their operations over the last year. City Finance Director John Lewis highlighted several accomplishments and awards, including the Excellence in Financial Reporting award for 12 straight years, and the Excellence in Budget Presentation award for the last five biennial budgets.