Pikes Peak or Bust! Part 10: The Road To Denver 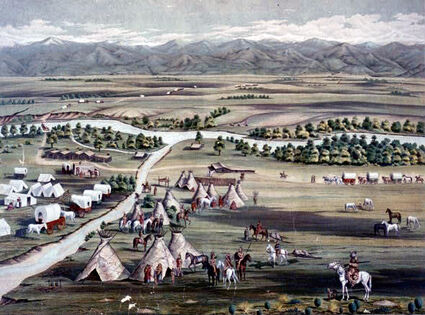 The U.S. Library of Congress

Daniel's cross-country odyssey in 1859 took him from Rhode Island to Colorado, and then back to California where he'd been prospecting for gold on-and-oﬀ since 1849. Jenks documented 130 campsites on that trip, even drawing some of them, leaving us a detailed record of his (mis)adventures along the way.

In the final installment of this Pikes Peak or Bust series, we join Jenks & Company on their way up the Colorado Front Range on the Cherokee Trail, bound for Denver City.

While Daniel thought the Pikes Peak Gold Rush was all a 'Humbug', he did spend some time prospecting for gold along Cherry Creek and in the area surrounding Denver - just to make sure. If Jenks couldn't find a claim that paid there, he was bound & determined to return to California.

We have fine weather now. This morning we drove about 10 miles and stopped for dinner. According to my idea of things in general, I should say this valley was much better adapted for farming than mining. This is as pretty a valley for farming as I ever saw. Our afternoon's drive was about 10 miles down the creek and along the whole distance was a succession of beautiful, level bottoms of rich, light soil.

If gold is ever discovered in paying quantities, this valley will then be valuable and its settlers rich men. But it all depends upon the AU, and that has not been found as yet. If one could but look ahead just one short year at this time...

God send all my friends at home as pleasant weather, as light hearts and as good health as we now enjoy in this Rocky Mountain country.

We moved down the creek about 2 miles to better feed, then leaving a guard at our camp the balance of us footed it down to Denver City. I found, as I expected, quite a collection of log houses, 50 or more maybe. There was not as large a crowd here as I expected to see, as many are leaving every day for the States. Those that were here wear very long faces, as the most sanguine fear that the bubble has burst.

And the balance agreed that this has been the biggest humbug ever built on so slight a foundation. Much, aye very much suﬀering has been occasioned. But what care the speculators for that? I had a man pointed out to me who it was said had eaten of his brother's flesh to keep from starving on the Smoky Hill Route.

We have been encamped for the last three days on the banks of the South Platte near this city. Tomorrow we leave here for Salt Lake City. I am satisfied now that there has been no paying diggings struck as yet, and I see no reason to hope for any in the future. These speculators resort to all manner of expedients to induce emigrants to stay here.

But I have proven to my satisfaction that all of their stories of big strikes are lies and nothing else. I see no hope for their wishes ever been realized. This country has been prospected now for a year and there has never been a single instance of success, not one, all the stories to the contrary notwithstanding.

In fact, some of the more honest of the merchants here have admitted to me that they have been deceived and now are trying to close out and leave here. Believing as I do, that there is no show here.

I have invested what few dollars I have in a team to take me through to California. I have now a four-yoke ox team and a saddle pony and are now all ready for my start across the mountains in the morning. All who can, are leaving here as fast as possible. Those who have teams are selling oﬀ their cattle at from $10-$30 a yoke to get provisions to take them home.

Others are building skiﬀs to float themselves down the Platte to the States. There are others who cannot procure even this means of conveyance, and they wear dreadful long faces as they think of their situation.

Amongst this latter class I found one solitary poverty-stricken Pawtucket man who would gladly have returned to Yankeedom if he did but know how to accomplish such an end. I loaned him $10 on long credit, as he said if he had that amount he could make a start.

One hears pretty hard talk here occasionally, as the excited Humbugged meet the Humbuggers. Thieves, liars and murderers are mild terms compared to some I have heard applied to the merchants here by the emigrants.

On the 25th it commenced raining and came on so cold that I turned in to my blankets in the wagon before dark to get warm. And this morning I woke up to find 6 inches of snow on the ground. By noon it had almost all disappeared before the warm sun's rays.

Every exertion is made by the townspeople to induce us to stay. But what on earth is there to induce a man to stop here? I cannot see. Our Illinois friends are taking passengers through to California from here.

This morning, after some trouble in gathering our herd of cattle, we at last got underway again. We have now 35 head of cattle in all. Our Ohio and Illinois boys and my team are traveling in company. We, all of us, speculated a little on beef stock and have a small band of loose cattle driving along in case we lose an ox.

Passing through Denver we were followed down to the river by quite a number of its inhabitants, who tried to prevail upon us to stay. We crossed at the ferry, traveled about 6 miles and nooned on Clear Creek. Our herd is in tolerable good traveling condition, we have fine weather today, and all are in first-rate spirits.

And now that the season is so far advanced, we expect to have a pleasant time in traveling through the wilderness. We expect to avoid the long bend to the north by Fort Laramie and the South Pass by taking a mountain trail right direct for Fort Bridger. But this is a road little travelled and we shall probably not see another team but our own until we get through.

After dinner we moved on over a hilly grassy country for 7 miles to this little creek, where we camped for the night in good feed. Our road from here to Cache La Poudre Creek will run along the foot of the mountains in a northerly course. Arriving at that point we commence our climbing, so said our guide.

We expect to see sights now in the way of traveling, for there are no ferries or bridges across the many streams we will have to cross. 1200 miles further to go. Don't it look like an undertaking to make this distance with an ox team? You bet!

After publishing the Jenks Journals, I set out to create a comprehensive map of Daniel's travels. Like many of the emigrants who came here during the Gold Rush Days, Jenks followed the Cherokee Trail up the Colorado Front Range, on his way to Fort Bridger in Wyoming.

But after Jenks crossed the Cache la Poudre Creek near Denver he changed course, and the route he described between Cache la Poudre & Fort Bridger didn't match the Cherokee Trail's route at all. In fact, his path didn't match any of the emigrant trails that were in use at the time. It was all very confusing. 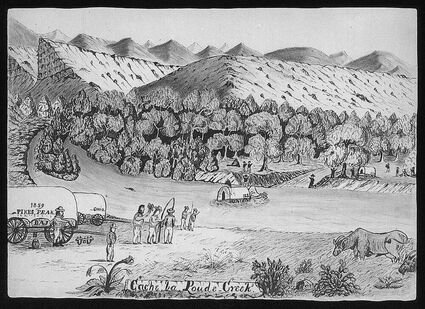 The U.S. Library of Congress

I knew if I was going to solve this puzzling history mystery, I'd need the help of some topic experts. After thoroughly researching the mysterious route Jenks was describing in his journal with the emigrant trail experts at the Oregon California Trails Association (OCTA), I learned that years later the road Daniel Jenks was writing about in 1859 would become known as the Overland Trail - one of America's most famous emigrant trails.

That's one example of how Daniel Jenks made history. In the future, I have no doubt Researchers and Historians will find many more.

"One of the most vivid and best written gold rush journals we have ever handled." - Christie's Auction House