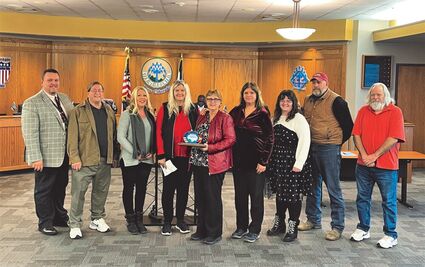 The Fountain Valley News was one of the first two recipients of the Spirit of Fountain Award presented by the Fountain City Council on Dec. 13. The other was awarded to El Paso County Public Health (EPCPH) Director Susan Wheelan.

The newspaper received the award in recognition for its many decades of service to the community, and in light of the announcement of its closure. This new award was developed to recognize individuals who have made an outstanding contribution to serve the community and who epitomize the "Spirit of Fountain."

"Your contribution to the city of Fountain and the larger Fountain Valley region will not be forgotten," Mayor Sharon Thompson said.

Council Member Tamara Estes explained that the newspaper had been part of the lives of countless longtime residents, including her own family.

"This newspaper began in 1958," she said. "My parents moved here in 1955. It's been a part of my mom's life since then. It's been a part of this community. For all of those years, they have not missed publishing, in all of those years, which is incredible. They don't just service Fountain, but it's the southern part of El Paso County. It's a big part of us, and we're going to miss you guys immensely."

(Editor's Note: More on this recognition in next week's issue.)

EPCPH Director Susan Wheelan received a Spirit of Fountain award in recognition for her efforts over the past several years to improve the overall health and livelihoods of the residents in the Fountain Valley through expanding access to services for all residents-including military families-in Fountain.

"Susan Wheelan is receiving this award for her leadership and partnership on regional efforts to address health concerns like COVID-19, development of a county facility to provide services to Fountain, creation of an emergency operations location in Fountain, and for being an advocate for mental health issues," Thompson explained. "Susan's collaboration with the City of Fountain has improved the health of all our citizens."

Wheelan noted some of her recent accomplishments in Fountain are due in large part to the city's leadership and staff members' diligence.

"The city of Fountain makes things happen because leaders come together and they take quick action," she said. "And it's a model, I think, that others can learn from."

Wheelan said she has worked closely with Fountain on teen suicide prevention to secure funding, as well as youth substance prevention issues.

"I always tell people it's not because Fountain has more problems, it's because the city leaders come together and get things done," she said.

Receiving this award "is really a bright spot in my life," she said.

Mayor Thompson provided the following background on this award: "The Spirit of Fountain award is a very special recognition that has been developed for the Mayor to recognize those who represent 'Pure Colorado' and all that Fountain stands for in their words, actions, and deeds. This concept was originally envisioned by Mayor Gabriel Ortega, when he was in office, as a unique way to honor those who have – often over a number of years – done something so important or momentous for the Fountain citizens that it needs to be acknowledged and proclaimed.

"The Spirit of Fountain is not an annual award, nor does it have a regular timeframe for consideration. It is given as the situation dictates. This is not a participation medal. Rather, It represents the highest ideals of service, partnership & collaboration, love of community, and sacrifice. All topped with a sincere desire to make our community a better place for current and future generations.

"There is a quote at the top of the award, from Ralph Waldo Emerson, that captures a part of the essence of this award: 'To laugh often and much; to win the respect of intelligent people and the affection of children; to earn the appreciation of honest critics and endure the betrayal of false friends; to appreciate beauty; to find the best in others; to leave the world a bit better, whether by a healthy child, a garden patch, a redeemed social condition; to know even one life has breathed easier because you have lived. This is to have succeeded.'"

Haller recognized for years of service 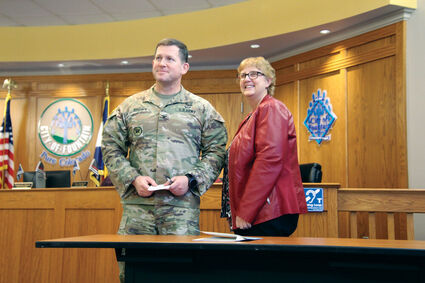 The City Council also recognized longtime city prosecutor Paul Haller for his 35 years of service to the city.

"To orient everyone, I was born in 1988," Johnson said, which caused plenty of chuckles in the audience.

Mayor Thompson said that while most people hope to never appear in court, she has heard many compliments of Haller even from defendants that felt "respected and heard" by him when they are in court.

In other business, the council approved a new Intergovernmental Support Agreement (IGSA) with Fort Carson by which the city will facilitate animal control on post through the Humane Society of the Pikes Peak Region. This is the third IGSA for Fountain and Fort Carson, and leaders from both extolled the benefits for both organizations, particularly financially.

"This is looking to save taxpayers three-quarters of a million dollars in the next 10 years," Col. Sean Brown said.