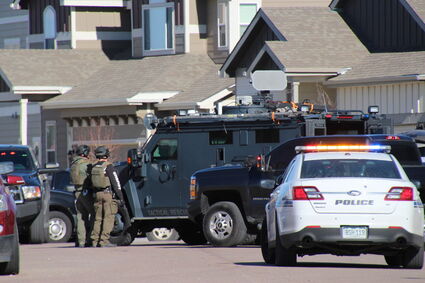 This Lorson Ranch neighborhood was inundated with law enforcement officials from various local agencies as authorities attempted to get a shooting suspect out of a home on Dec. 19. Officials say they found three adults dead inside a home in an apparent murder-suicide.

UPDATE Dec. 29, 2022: The suspect has been identified as Wilmer Soto, age 33. The victims are 27-year-old Vanessa Anderson and 26-year-old Autumn Kirkpatrick.

"Our sincere condolences go to the family and friends of Vanessa and Autumn," an El Paso County Sheriff's Office statement released on Dec. 29 stated.

Friends and relatives of the victims previously confirmed their identities and stated that Vanessa Anderson had been in a relationship with Soto, and that she was pregnant. They claim she had expressed a fear of returning to the home to retrieve her belongings after a previous domestic incident with Soto. Autumn Kirkpatrick, who also leaves behind a young daughter, accompanied Anderson to the home the day of the shooting to help her friend move items out of the house.

ORIGINAL Dec. 19, 2022: A standoff between a shooting suspect and law enforcement in Lorson Ranch on Monday ended with the death of the suspect in what officials are classifying as a murder-suicide case.

Around 9:54 a.m. Dec. 19, the El Paso County Sheriff's Office Communications Center received a transferred 911 call, according to an EPSO news release. The caller indicated a man was shooting within a home located in the 9800 block of Rubicon Drive. The caller heard multiple shots being fired.

Deputies assigned to the El Paso County Sheriff's Office Patrol Division arrived on scene and confirmed the suspect was barricaded in the home. The Tactical Support Group (TSG) was paged out shortly thereafter, the EPSO statement continued. The Tactical Support Group consists of SWAT, K9, the Crisis Negotiations Unit, members of the Regional Bomb Squad which is staffed by both El Paso County deputies and Colorado Springs Police Department officers, Tactical Dispatchers, and Tactical Medics from the Colorado Springs Fire Department.

"Upon the arrival of the TSG, communication attempts began and were unsuccessful," the statement continued. "At around 10:34 a.m., an emergency text notification as well as social media messaging was sent out to residents within a 1/4-mile radius of the address." 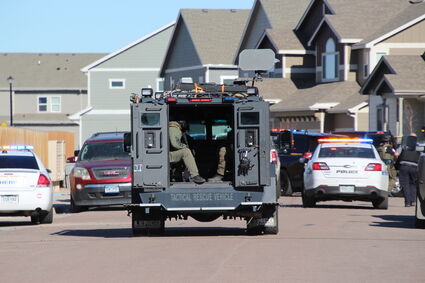 Detectives with the Sheriff's Office Investigations Division responded to the scene and began to investigate.

"The suspect had a domestic relationship with one of the victims," according to the Sheriff's Office statement. "The name of the suspect and victims will not be released at this time pending identification by the El Paso County Coroner's Office and notification of next of kin."

There is no known threat to the community, officials stated. This is a continuing active investigation and more information may be available later.

Incidentally, the location of this incident is just a few doors down from the house where a bomb threat took place in 2021. That incident allegedly involved accused Club Q shooter Anderson Aldrich.