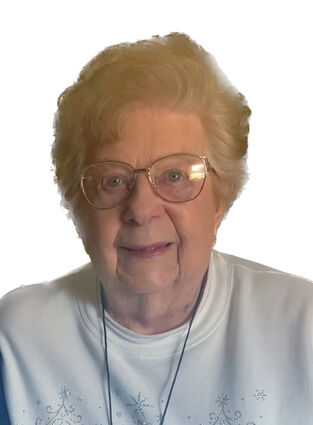 Louise Alyda Schutte Leechman died peacefully on the morning of December 20, 2022, with her granddaughter by her side. Danielle was playing a Sinatra song, "Come Fly With Me," at the time of her death. Frank Sinatra was Louise's favorite singer/celebrity all through life, and like him she would say, "I Did It My Way!" And she certainly did.

She began life in Paterson, New Jersey, January 30, 1922, to Alice Van t'Hul and William John Schutte, immigrants from Holland. Her two sisters Catherine McConaghy (Joseph) and Anna Petruff (George) preceded her in death. Louise moved to North Miami, Florida, in 1953 with her two daughters and lived there until she relocated to Fountain, Colorado, in 1976. In 1988 she married the love of her life, John C. (Jack) Leechman, who preceded her in death.

Her first job was at the age of 15 at Kresge 5 & 10 for $.25 an hour. Her last job was office manager for the Fountain Chamber of Commerce. She was hired at the age of 75 and officially retired from the workforce four years later. It was here that she was first taught how to use a computer! Prior to a stroke in July, her computer skills were quite proficient, and she would text her family daily. At the age of 87 she wrote a book detailing the first 31 years of her life. She finished the second half of her autobiography at 91. Before becoming homebound, Louise was a faithful member of First United Methodist Church of Fountain, and her book "Our Church History 1984-2009" was officially published in 2015. At the age of 100, she was honored by her church and community with a drive-by parade complete with local police and firefighters. She was a former member of The Fountain Valley Crafters/Women's Club and an honorary member of Beta Sigma Phi.

She delighted in her mountains, the Broncos, oil painting, golf (especially Phil Mickelson), and all animals. She even delivered a baby alpaca in her 80s when no one else was present to help. Louise was admired and loved by her family for her giving and compassionate spirit. Nothing meant more to her than relationships with family and friends. She was a classy lady who survived many of life's challenges with sheer determination and a tenacious sense of independence.

A memorial service will be held at The Shrine of Remembrance, 1730 E. Fountain Blvd., Colorado Springs, CO, Saturday, January 28, at 2 p.m. In lieu of flowers, please honor Louise by making a donation to your favorite animal rescue.