Community was No. 1 priority for newspaper 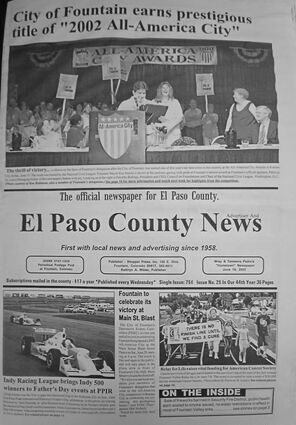 The Fountain Valley News was deeply involved in Fountain being considered for the honor of All-America City in 2002, and then featured the announcement of the city's win on the front page of the June 19, 2002 issue.

In October, 1958 Carl H. Wiese and Helen Kay Larson co-founded a small community newspaper, then known as Security Advertiser, serving the communities of Security, Widefield and Fountain and surrounding areas; published by Shopper Press, Inc. The paper was initially located at a site in the Security Shopping Center. Herb Oerter originally had started the Shopper Press from the office in the shopping center, just prior to Wiese and Larson buying it and turning it into the Security Advertiser.

The front page of our first issue of the Security Advertiser shared how four years prior "the Village of Security was born in the lush little valley north of Fountain, where cattlemen once pastured their stock while waiting for boxcars to ship out the critters. It started with a grand opening display of only three model homes by the American Builders in what had been an alfalfa field east of US Highway 85/87, and about five miles south of Colorado Springs..." It continued, "Today this same village boasts 1,675 homes with a population of approximately 7,500 residents." The story related that Security had one private club – the Security Athletic Association – which built and operated its own swimming pool. It had a village park on which landscaping was in progress. Two churches had been built and three other religious groups were having services in houses. Security had a complete set of modern school buildings, including a junior-senior high school and 3 grade schools. A new sub-station of the Colorado Springs post office had just opened too.

Security's shopping center, which included the post office, 2 gas stations, a bar and café, a malt shop, dry-cleaning business, barbershop, drug store, doctor, two dentists, liquor store, shoe store, a small hobby shop and a completely modern supermarket owned and operated by Earl Simms. An addition being made would become home to a new Duckwall's store. A new and used furniture store was in the works, too.

The story reported "the enterprising businessman who with great foresight and planning brought all of this about is Fred Sproul, Sr. a former Wyoming cattleman." It said he was the chairman of the board of American Builders which constructed the village of Security. "As the village grew, its new citizens formed the social groups marking every American town- Girl Scout and Boy Scout, ladies clubs, PTA, a water district and volunteer fire department." Also in the first issue was an article about the new Widefield High School Junior Rifle club that was organizing.

A greeting from the staff printed on the front page read "The Security Advertiser greets the citizens of Security in this, our first issue. We are but a baby now. Before many moons have elapsed we expect to have grown into a full-fledged man well able to represent the community in all aspects."

Over time, the paper grew to quickly become the Fountain Valley community's main source of local news and advertising. It has been delivered "every Wednesday" by carrier and by mail subscription since 1958. It enjoyed being the only locally-owned and operated news source in the Fountain Valley for more than six decades.

In 1969, Larson published a popular book covering the history of the Fountain Valley titled "Valley of the Fountain." In it she covered how the area got its name "from the creek that originated high in Ute Pass, winding its way down into Manitou Springs, around the south edge of Colorado Springs, thence down the edge of the Great Western Plains, joining with the Arkansas River at the city of Pueblo. Named originally by French trappers in the area, "Le Fountain que Bouille" was the bubbling creek which fed a part of the soda-like spring waters in Manitou Springs and which attracted the Plains Indians from hundreds of miles around." She explained later generations boiled the name of the creek down to the English term of "Fountain" and the tag remained."

She also featured the story of Fountain's Founders (Owens, Lock and Terrell), the founding of the town of Fountain in 1859 (the same year as Colorado City, Denver, Golden and Central City), built with the idea it would some day be the biggest city in the state. However, at 2:30 a.m. Monday, May 14, 1888, Fountain had the biggest boom of its history when 17,000 pounds of giant powder in a railroad car exploded and literally blew the town off the map of Colorado. No longer would Fountain be in the running to become the Centennial State's capital. Actual incorporation of the Town of Fountain was on April 23, 1903, making it the oldest incorporated town in the Pikes Peak region.

Larson was quite involved with the Fountain Valley Fine Arts Association and the Chamber of Commerce among other community organizations. When a small stage was built at Fountain's Metcalfe Park, it was dedicated in her honor. Years later the stage was torn down to make way for the large gazebo at the same site.

Ms. Larson passed away the summer of 1981 after a courageous battle with cancer. Then Mr. Wiese became sole owner.

A self-described "farmboy from South Dakota" and son of German immigrants, he enlisted in the Air Force and served as a photographer and "paid tourist" as he would say. He moved to Fountain in 1956 and invested $1,000 in the weekly shopper that evolved into this newspaper. He lent his photographic expertise and became the driving salesperson, while Larson's focus was on newswriting.

Carl lived his motto "To build a better world start in your community," and much like Larson, was active in just about every local organization that existed. Carl also served as Fountain's municipal judge for many years. He was a founding member of several local groups including the Fountain Valley Optimist Club, Fountain Valley Dollars for Scholars, and was a leader with the chamber of commerce, Security Lions and more. He was on the board of director for the Fountain Valley Bank (now known as UMB). His passion for nature and open spaces and riding his horses in the company of his beloved wife, Kathryn, brought him to serving on the El Paso County Parks Advisory Board and he helped plan what would become the Fountain Creek Regional Park, including the Active-Use area at Duckwood Park.

A trail bridge over Fountain Creek at the southern end of Fountain Creek Regional Park (near the Hanson Nature area) was memorialized in Carl Wiese's name for his service as a member of the El Paso County Parks Board, helping to plan the regional park and active use area, and because of his years of service to the community, especially with the parks advisory board. He shared how on one of their rides along the creek he and Katty discovered a safe that was lodged deep within the sand in the creek. It could not be moved and he didn't' have his camera. Some time later he spotted it again further down the creek, pointing out it was over 200 pounds and definitely would not have floated to its new location. He said it emphasized the power of the creek when water is running high. Wiese also used to tell the story of taking a canoe down the creek starting at a point north of Security and coming thru the waterway to Fountain. 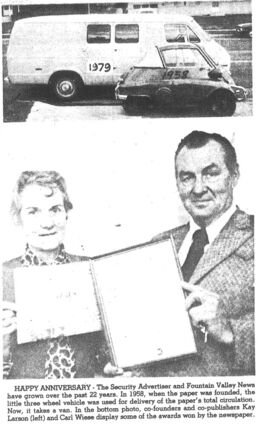 With Wiese's death, his wife Kathryn became sole owner of the paper, serving as owner/publisher since 1994. Shortly thereafter, her eldest daughter Karen Johnson joined the staff, moving home from the Glenwood Springs area where she had lived for many years. She has served as a reporter/photographer office manager, advertising and legal notice manager at present is the general manager. Her wildlife photography has been a popular feature in the paper, and her work featuring the wild mustangs of Sand Wash Basin is not only acclaimed, it helped to raise funding for a fence to protect the wild horses and secure a border of the wildlands where they roam that was next to a highway.

Kathryn's younger daughter Patricia St. Louis who had started at the paper in 1981 when she was 18, had worked as a reporter/photographer, and wore additional hats over the years, filling the position of editor when Carl became sick. She continued to serve in that capacity until October, 2020 when she retired. After being away for a little more than a year she returned to serve in the role of Assistant Manager and circulation manager.

Throughout its six decades of existence, the paper and its staff has earned numerous awards from the Colorado Press Association as well as many honors from local service groups and other organizations in the Fountain Valley and El Paso County.