Developments on the horizon for the region 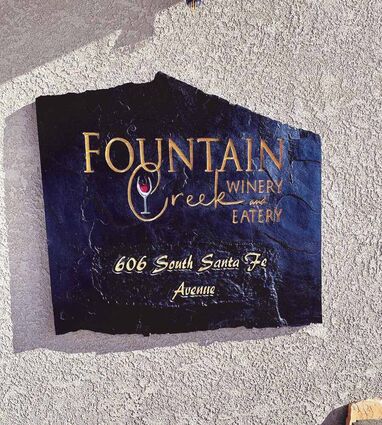 Fountain Creek Winery in Olde Town Fountain will be ready to open soon.

As this is our last issue, we wanted to provide a roundup of some developments - both commercial and residential - that may be on the horizon for the Fountain Valley region. Some have been in the works for some time and are not quite ready for construction, and others are on the verge of opening - like the new Fountain Creek Winery in Olde Town Fountain.

Fountain Creek Winery, at 606 S. Santa Fe Ave., will have its first event on New Year's Eve, with regular business hours to begin shortly thereafter. The business will offer breakfast and meals throughout the day, as well as Colorado wines. See fountaincreekwinery.com for more details.

Two other restaurants are preparing to open and are hiring staff: Rooster's Grille & Pizzaria 2 at 412 Royalty Place near the corner of Crest Drive in Fountain, and The Local Table at 215 Fontaine Blvd. near Big R. The Local Table has set a grand opening for Jan. 9.

The open space just west of Black Bear Diner and Walgreen's on the south side of Mesa Ridge Parkway is set to become a large apartment community known as Garrison by Watermark.

Land between those apartments and Syracuse Street is slated for a mix of commercial development, but a contact for the company charged with finding businesses for the land said there have been numerous delays in the process and that an announcement of specific tenants is not possible just yet. That news could come soon, so stay tuned to the Fountain Valley News Facebook page for that. When asked about a possible grocery store here, a representative did not confirm nor deny the possibility.

LaGree's, which purchased land in south Fountain near Link and Old Pueblo Roads for a grocery store, is not likely to begin work just yet. City officials said it would likely be another year or two before anything materializes there.

UC Health previously announced plans to develop a major medical campus in Fountain, though not a full hospital. Syracuse Street is one of the sites being considered, but no decision on exact location has been announced yet.

Further north at the South Academy Highlands, a new hotel is planned near the Holiday Inn Express. This is still in the review phase, according to Fountain Planning Supervisor Kristy Martinez, and will be called Townplace Suite.

Also in that area along Venetucci, across from Sam's Club and Walmart, is the construction of three new restaurants: Slim Chickens, Panda Express and Arby's. A fourth business announced previously was an auto parts store; Martinez said it is not clear if that one is moving forward at this time.

Along Hwy. 85-87 in the location of the former Fountain Valley Shopping Center, a new retail project is planned but has been quiet since demolition of the old strip mall occurred in April 2020.

"The City has completed their review of the plans and we are waiting for the developer to submit the plans for final approval and signature," Martinez said. "No time frame as to when that may occur."

About 225 single-family homes are slated for the rear of the retail phase, and that portion sits on county land. Main Street will be extended into the shopping center and toward the residential area.

Other housing projects in the Fountain area include Corvallis, south of Fontaine Boulevard and west of Marksheffel Road, which will add roughly 1,000 new homes there. Plans are under review, with no start date set yet. 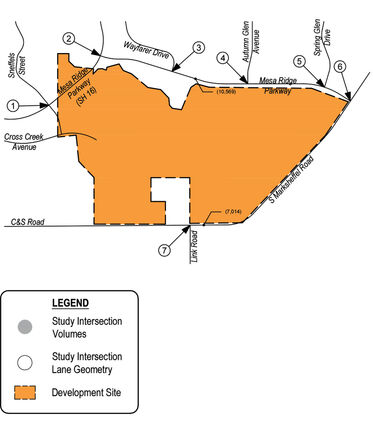 This map provided in planning documents shows the location of the Mesa Ridge development. The City Council will review amendments to the plan in the near future, but no specific date has been set yet.

Recently the Fountain Planning Commission voted 5-0 to forward a new Overall Development Plan for Mesa Ridge to the City Council. Mesa Ridge encompasses existing residential builds southeast of Sneffels Street and Mesa Ridge Parkway (between The Glen and Cross Creek neighborhoods), plus additional open land yet to be developed extending toward Marksheffel Road to the east and C&S Road to the south.

Although no major revisions have been proposed, some residents in the area said they were surprised to learn that the overall density of around 2,385 homes is as high as it is. The general scope had been set years ago, but some people did not realize how many homes were proposed.

The plan calls for new elementary and secondary school sites, to be in Widefield School District 3. Commercial acreage would be reduced from 35 acres to 20 near the intersection of Mesa Ridge Parkway and Marksheffel Road.