Capturing priceless moments over the years 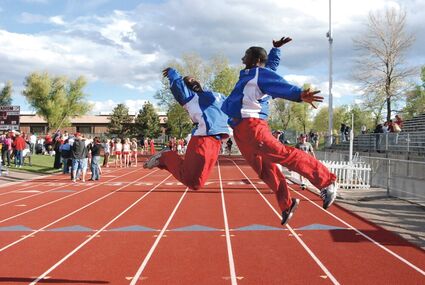 Mile High Five – Julie Jones says this is one of her favorite photos from over the years. It is from the 2010 State Track Championships in Denver, where FFCHS brought home another boys' state championship. These are two of the FFCHS sprinters, with the Mile High High Five.

I am a part of the Fountain Valley News family. I joined the family in 1988, after asking then FFCHS head football coach Mitch Johnson if there was anything I could do to help. He said, "Yes. Write the football story each week."

I was the varsity football statistician at the time, and we had just come off a great 1987 season, with an appearance in the state final for 2A football. For the first time since I started doing stats in 1982, we were getting media coverage. Not tons, mind you, but they finally noticed this small school in Southern Colorado. I was the voice at the other end of the pay phone who had been at the game and could describe it. So I asked Mitch what else I could do, to help keep this attention on Fountain-Fort Carson, and thus I became part of the Fountain Valley News family.

Small town weekly newspapers were not on my career radar. I was a music major, and was already the piano accompanist at FFCHS. In the common tradition of small schools, most of us wore multiple hats. So I learned to write a decent story about the game, and to hold a micro cassette recorder in front of Coach Johnson to get post-game quotes. (One does not "interview" Coach Johnson. You start the tape and let him talk.) And I kept doing it, but in the 90s, I also became interested in sports photography, got a decent camera and even more importantly, a decent teacher for the photography. (Thanks Don!)

I didn't do a lot of photography back in the day. It was kinda expensive, what with film and developing, and tricky to manage the camera and clipboard. But time moves on, and digital photography was developed. Instant gratification! I learned to anticipate my shots, and ways to store and share the photos. I went from 60 photos a game with film, to 150 photos a game on 3 ¼-inch floppies, to today's 400-plus photos a game on a micro SD card.

In 2001, I added all sports at FFCHS to my photography duties. Then I expanded that to include Widefield and Mesa Ridge high schools. Today, while retired as a piano accompanist, my retirement job is photographing high school sports in the Fountain Valley. I have a small website where I post scores and photos, and another website I place all my photos for viewing. By my guess, I now have about 800,000 photos, from 2001. I stopped writing the FFC football story in 2019, but have kept up with photos.

And now, like going from film canisters to floppy disks to micro SD cards, the way we consume our news has also evolved. Generally speaking, we expect to get it in small bites, delivered to us via that computer we carry in our hands everywhere. Advertising has also changed with the times, with targeted ads dropped on our handheld devices and through our social media. The time of the small town newspaper seems to have passed.

And that's really sad. Our small town weekly helped keep us all connected, as humans, not through the internet. We got helpful hints about our backyard bird feeders, who our Homecoming Queen was, recipes, news from our town council, good, local small businesses to patronize, who had the biggest zucchini this year, and photos and stories from that quintessential small town event – the local parade. We had the news that made us the Fountain Valley. The news that made us special.

I think about these things now, as I watch the sand pour through the hourglass. Time is passing, and all I can do is watch. At this writing, I have COVID. I'm virtually symptom free, but still testing positive, so no going to that swim meet, wrestling match or basketball game right now. I won't see the kids saying, "Take my picture, take my picture!" I may not have a final set of photos heading over to the paper. Also, as many have with COVID, I've lost my sense of smell and taste. Which makes me think of the loss. Food just doesn't taste so good without smell and taste. Right now, I have to choose things based on texture, not flavor. This will pass, however. I'll still be taking photos, just posting them to social media and my websites, and not a Monday morning rush to get them to the paper on deadline.

But that sense of community found through our shared experience with the Fountain Valley News will have to be built elsewhere. We can't just retreat to our carefully curated bubbles. If we don't interact, we stagnate. Hopefully, we'll find a way to connect, to share the stories of our small community, that won't be found in the larger media world.

So thank you to the Fountain Valley News for being that connection, and all my newspaper family. You gave me a place to be, and a place to celebrate the accomplishments of thousands of high school students. Family is forever, even if we're not living in the same house.